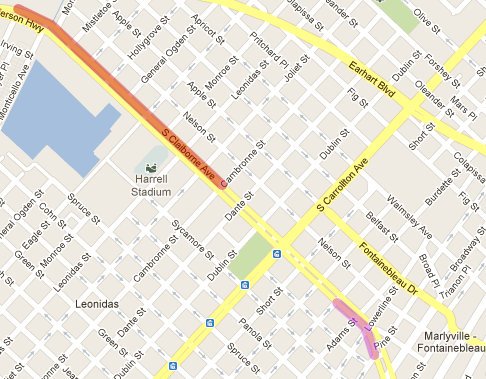 The red section represents the area of South Claiborne Avenue already reduced to two lanes for the next two years; the purple area will close Wednesday until spring of next year. (map by Robert Morris, UptownMessenger.com)

Starting Wednesday (Nov. 28), another stretch of Claiborne Avenue in the Carrollton area will be reduced to two lanes until at least March of next year as a new underground drainage canal is built under the neutral ground, officials announced today.

The eastbound lanes of a three-block stretch of Claiborne between Burdette and Pine streets will be detoured to the westbound side, allowing workers access to an intersection of canals under Lowerline Street, according to an announcement by the Sewerage and Water Board.

In September, officials closed the two westbound lanes of South Claiborne from Cambronne Street up to the Jefferson Parish line through the Hollygrove and west Carrollton areas for an anticipated two-year time span.

That earlier closure allows construction of Phase I of the new canal, which will start at the Jefferson Parish end and work its way down Claiborne. Phase II is actually beginning at its downtown end at Lowerline Street and working its way back up Claiborne, and the two projects will join up in the middle at Leonidas Street, officials explained at an information session back in January.