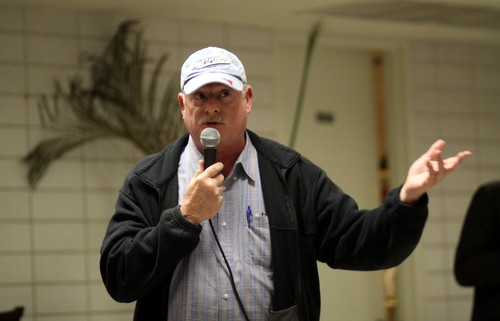 Lycée Français de la Nouvelle Orléans has an as-yet-unexplained hole of at least $90,000 in the current year’s operating budget that required the sudden layoffs of three staff members, the school’s board president said Wednesday evening, leaving many of the young school’s teachers openly fearful for their jobs and drawing angry protests from a room full of parents.

The school board has already engaged a team of auditors to help it gauge the true state of the school’s finances, board president Jean Montes said, and they hope to know the full extent of any future cuts needed within the next three weeks. For the audience of more than 150 people at the meeting of the school’s parent-teacher organization, however, the revelations only raised more questions.

Growing shortfall
Back in the summer — apparently not long after approving the 2012-13 budget in early July — school leaders began raising questions about the finances that they could not get answers to, Montes said, leading to their seeking the resignation of the business manager at the time, David Bedell. As they looked further into it, Montes said, school leaders have discovered that the budget now has a shortfall of at least $90,000.

“The board was operating based on the numbers it received,” Montes said, explaining the surplus the budget showed when they passed it five months ago.

How the hole in the budget was created remains to be determined, Montes said. Part of the problem may be that money allocated for this school year has already been spent, Montes said. But at a parent’s inquiry, Montes said he could not rule out theft.

“If anything was stolen, we are going to go after everyone who stole that money,” Montes said.

Midway into the meeting, Bedell himself appeared at the front of the cafeteria and asked for a chance to speak. He identified himself as both “the one being blamed for the demise of this school” but also the great-grandparent of a student who loves Lycee. Bedell defended his budgeting, and said the board was approving spending not included in the budget.

“No money was in the budget for all the repairs in getting this building up to date,” Bedell said of the school’s new campus on Patton Street. “I have no idea how it was paid for. It’s all up to you to find out.”

Layoffs looming
Whatever its cause, the budget gap has recently forced the school to lay off three administrative employees: an office manager, an assistant to the school director and the school after-care coordinator. The audit is continuing, however, and more cuts are likely soon, Montes said.

“I’m anticipating some kind of cuts in the next three weeks,” Montes said.

“We are still in the process,” Montes said. “They’re all potentials.”

Montes’ meeting with the French teachers Wednesday did little to reassure them, however. Prior to his arrival at the meeting, a group of 20 or so of them approached the microphone together and read a prepared statement saying that they are all worried about the consequences of the recent cuts.

“These decisions have an impact on the teaching conditions in the class,” the teachers read, to a loud standing ovation from the parents.

The parents repeatedly voiced support for the teachers and school director Jean-Jacques Grandiere. But the uncertainty among the faculty, they said, is breeding fear among the families about the school’s future.

Montes replied that he appreciated the concern in the room.

“The fact that you’re here is very hopeful,” Montes said, noting that he too is a parent at the school. “I understand the anger that you have. I have the same anger.”

Ongoing issues
The board members’ level of involvement in the school’s daily operations has been debated persistently and openly at least the announcement in April that founding principal Jill Otis would be resigning, and it resurfaced several times Wednesday. One parent said she felt that the staffing decisions should be made and announced not by the board, but by Grandiere.

“I am concerned that he’s not making decisions about who is fired,” she said.

“This is a great program, but if you’re going to have the board micromanage it … I guarantee you won’t have success,” another woman warned.

The school has been under scrutiny at the state level for its admissions practices and diversity issues lately as well, other topics that were mentioned on occasion by meeting attendees but never addressed outright. A separate report on those issues before the state Board of Elementary and Secondary Education is set for 6 p.m. Wednesday, Nov. 14, at the Sophie B. Wright Institute for Academic Excellence, 1426 Napoleon Avenue.

Meanwhile, the Lycee board will have its own usual monthly meeting at 6:30 p.m. Monday at the school, and after about an hour of discussion, the budget issues were tabled until then. Daniel Carr, a member of the school parent-teacher organization board, likened the open discussion of the school’s financial problems to the catharsis that comes from delivering a eulogy at a funeral: painful at the time, but ultimately beneficial.

“This is good,” Carr said. “We’re not going to reach a solution here tonight. There’s too much we don’t know. But what we’re doing here is good.”