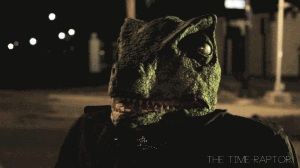 You’re in luck — the annual Hell Yes Fest opens Tuesday (Nov. 6) with the world premiere of “The Time-Raptor” at Prytania Theatre.

For details, see the press release from the festival:

In 2013 Hell Yes Fest expands to include New Orleans’ first film festival devoted to comedy. This year though we offer a sneak peak before Hell Yes Fest starts with two special attractions at the gorgeous Prytania theater in the heart of the city.

From the minds of Jonathan Evans and Jared Gore comes THE TIME-RAPTOR. One lonely night, Mike is visited by a time traveling dinosaur who, in exchange for a simple favor, promises to help him win back the hand of his estranged lady love. They just have to run a few errands first.

Also on the bill we’ve got the first in a series of comedy retrospectives starting with Studio 8, the minds behind The New Movement, Hell Yes Fest, and a slew of other short films and comedy projects. Brock LaBorde and Chris Trew will be in attendance for a lively conversation as rare and never-before-seen footage shows the evolution of Studio 8 from dorm buddies to comedy behemoths.

Hell Yes Fest, the annual comedy festival held each November in New Orleans curated by Chris Trew, co-founder and Creative Director of The New Movement and co-owner of Studio8.net, is geating up for a hilarious week of Film, Improv, Standup and Sketch Comedy November 6th- 10th, 2012 at venues in New Orleans including: Prytania Theater, Republic, The Shadowbox Theater, The New Movement Theater, Cafe Istanbul, Siberia, and The Hi Ho Lounge.

Headliners Include:
Christian Finnegan, Joey Greco, Theo Von, Duncan Trussell, Rory Scovel,
and many more will travel to New Orleans to take part in this event.

For the full and more information vist: Hellyesfest.com.
Tickets for all events are on sale and available now at hellyesfest.eventbrite.com