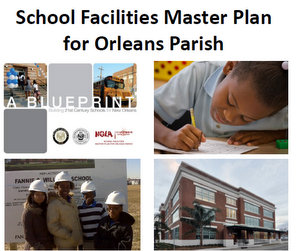 When the Master Plan for distributing a $2 billion FEMA payment for school rebuilding was approved last year, officials hailed it as a panacea of sorts that would ensure every Orleans Parish student is at least in a building that is “warm, safe and dry.”

Now, school leaders are unsure the money will even go that far.

“Unless construction is under way, every project might see some cuts,” said Orleans Parish School Board member Lourdes Moran. “The Master Plan has to be reopened.”

The Master Plan approved last year calls for a combination of building state-of-the-art new schools in some communities hardest hit by the flooding after Hurricane Katrina, such as the Dunbar site in Hollygrove, while repairing those that are usable but still have major structural damage, such as those used by Lusher and Audubon charter schools. Some of the sites are controlled by the Recovery School District, and others by the Orleans Parish School Board, and the projects range from already complete to not yet begun and nearly every phase in betweeen.

Thursday’s revelation that the Master Plan projects are already significantly over budget came during a meeting of the OPSB property committee. As committee members reviewed recent low bids for several new projects that came in over budget, OPSB Superintendent Stan Smith said his staff is currently evaluating the financial status of all its Master Plan projects. Together, they are running over budget by several percentage points, Smith said.

The bids on the table Thursday were over budget by a combined $14 million, Moran noted, and many more have yet to go to bid.

“So far, the preliminary shortfall is $14 million,” Moran said. “For each project that rolls out, the shortfall increases, and that $14 million grows substantially.”

Together with the approximately $8 million overage the projects already underway have accumulated, Smith said the total shortfall just for OPSB projects is more than $20 million. The Recovery School District’s projects are also running over budget, and they control many more school sites, noted board member Woody Koppel. Because the $2 billion FEMA payment was a one-time sum, the Master Plan will have to be “re-prioritized,” school system leaders agreed — though which schools that refers to was not clear, and an update on current projects then began as scheduled.

Another factor may further contribute to budget shortfalls, Moran said: so-called “contingencies” that are not expected in the initial bid. The budget for individual schools does not include a figure for unexpected change orders to deal with circumstances that arise during construction, and that amount can sometimes reach 9 or 10 percent per project, said the OPSB’s Herman Taitt.

Board member Thomas Robichaux suggested that with strong management of the construction projects on the table, the projects in the Master Plan may all be possible. Moran was less optimistic.

“No, you’re wrong,” she rebutted him.

Audubon Charter School Principal Janice Dupuy and facilities manager Alisa Dupre were in the audience for the committee meeting, and applauded mention during the review of ongoing projects that pile driving for the Broadway campus renovations will begin Monday. But the discussion of the Master Plan budget shortfall left them concerned about their “temporary” Carrollton courthouse campus, in dire need of renovations to fix serious problems with the roof.

The problems at Carrollton are so severe that they must be addressed, Dupuy said, but it is now uncertain how or when those repairs will be made.

“When you’re talking about a $20 milliion deficit in the Master Plan, what does that mean for stabilization?” Dupre asked. “I don’t know how much interest they’ll have in tapping into stabilization money, when it [the Carrollton building] is a temporary solution.”

The full Master Plan approved in October 2011 can be viewed here. (The rebuildingnolaschools.com website that formerly held information about the plans has apparently been allowed to expire.)

For live coverage of Thursday’s committee meeetings, see below. The discussion of Master Plan projects began around 3:30 p.m.