Article by Marta Jewson, for UptownMessenger.com 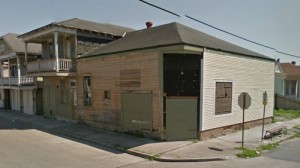 An undated image of the building at the corner of Leonidas and Willow from Google Maps.

The owner of a building at the corner of Leonidas and Willow is proposing to change its zoning from residential to neighborhood business for a contractor-training office and community space, raising some questions among surrounding neighbors.

Tilman Hardy’s business, CORE USA, trains contractors in building performance, and he plans for it to share space with a community initiative called Leonidas House where neighborhood organizations and community members can meet. He hopes users will keep the space clean and that there will be no need for maintenance costs on that side of the building, he said.

“For three or four years we’ve been trying to develop a community-based center for sustainability,” Hardy said.

Hardy will request the zoning change from two-family residential to neighborhood business (which also allows restaurants, retail, clinics and other uses) Tuesday afternoon before the City Planning Commission. The commission staff report calls it a spot zoning request but says it is eligible for consideration because of its historic commercial use, and recommends its approval based on the low-density mixed-use designation in the Master Plan.

Neighbors of the project said they were unaware of the building’s future use. Gerald Taylor Jr., who lives in the adjacent block of Willow, said he learned of the zoning change from an elderly neighbor who brought him the hearing notice she found at her door, asking what it was about.

“I saw volunteers here, but all of a sudden, it stopped,” Taylor said.

Hardy said volunteers helped deconstruct the site, but he had been waiting to move forward with renovation until he had the funding.

“Typically when somebody does that, we’d like to know specifically what they plan to do and that they get in touch with the neighbors around there to some extent,” said CRNA member Jerry Speir at the meeting.

“My concern is that he has not spoken to neighbors about it,” said member Betty DiMarco said.

Hardy said he did not have plans to sell and would be happy to speak with anyone wondering about the building.

The City Planning Commission meets at 1:30 p.m. in the council chamber at City Hall.

One thought on “Office, community center proposed for corner of Leonidas and Willow”