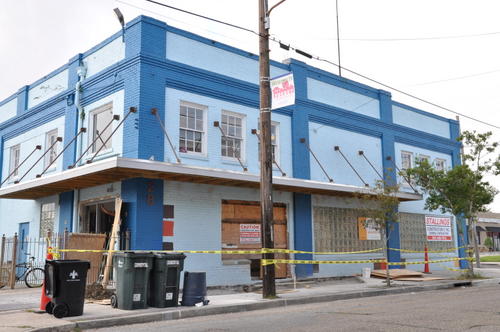 Construction continues on the first floor of the Neighborhood Housing Services building on Freret Street, where the PubliQ House will open next month. (photo by Marta Jewson for UptownMessenger.com)

Article by Marta Jewson, for UptownMessenger.com

Funky Butt Jazz Club owner Shanekah Peterson will reopen her storied establishment at a new location on Freret Street at the end of this year, part of the next wave of new business openings on the corridor that also includes another cocktail bar, an upscale sandwich counter and a coffee shop.

Funky Butt’s new location at 4716 Freret still houses a large vault from the former bank. She said the vault might be used as a mixology station, or a space to pay homage to the club’s French Quarter roots.

“I want you to step in to an era reminiscent of the red light district in the French Quarter,” Peterson said of the Funky Butt.

Peterson is excited about the club’s new home on Freret Street. She expects construction to be completed in November and the first show on Jan. 1. Peterson said to watch for Trombone Shorty and Irvin Mayfield as frequent performers.

Down the street, Rhett Briggs plans to charge up the corridor’s nightlife with Freret Street PubliQ House starting in November. The venue occupies the first floor of a building shared with Neighborhood Housing Services, at 4528 Freret Street.

The name uses a ‘q’ to represent liquor, as a play on words in the name of what Briggs describes as a “cocktail pub”.

The focus of PubliQ House will be “a bar first and a music venue second,” Briggs said.

Briggs says his establishment will have a wide variety of spirits and specialty cocktails alongside a large selection of bottle and draft beer. Briggs said a 1952 Dodge Army truck, complete with bullet holes, will serve as the sound booth, in addition to other funky décor.

A few doors down, Scott Solo will operate Rook Café at 4516 Freret Street, with plans to open in December.

The name Rook Café stems from the chess piece, as Solo sees coffee and chess going hand-in-hand. Solo envisions a French-salon style with large paintings on the wall providing a hip and comfortable atmosphere.

“I want to welcome everyone from the neighbors to college students,” said Solo.

He is excited about the location in an “up-and-coming commercial business area” and the proximity to the universities as well as the hospital. The café will also serve homemade pastries and soups.

Wayfare, an upscale sandwich counter at 4510 Freret, will also open in December. Ray Arnona alongside his son Vincent and daughter Toni will operate the restaurant, a family-run business like their Vinnie’s Sports Bar and Grill on the West Bank.

“We will have a sandwich counter and plan to serve high-end handcrafted artisan meats and cheeses,” said Toni Arnona.

In addition to the sandwich counter, there will be plenty of room for tables in the 3,600-square-foot space. Customers can order from the counter or sit down for drink and food service. The menu will feature mainly sandwiches, with seasonal salads, soups and sides.

Eventually, Toni says, they plan to cure their own meats and sell them in-house. She said Wayfare would also offer specialty jams, pickled products and various other items in a grocer section. 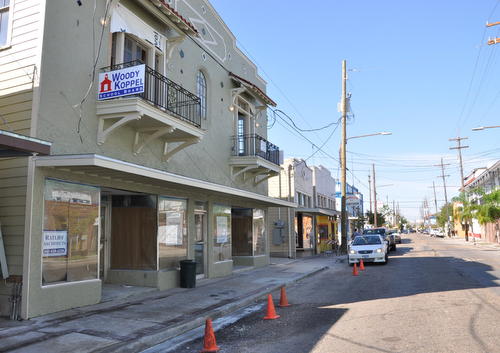 This building in the 4500 block will become the home of Wayfare restaurant in December, its owners said. (photo by Marta Jewson for UptownMessenger.com)