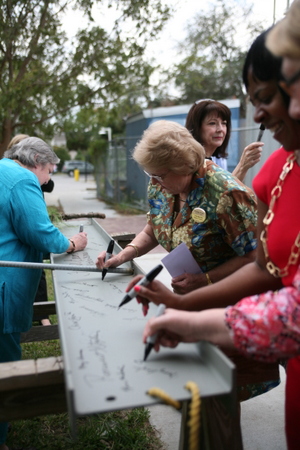 Poydras House supporters sign the final beam to be placed in the new addition just before it is hoisted high into the air. (submitted photo)

The final steel beam was placed on the framework of the three-story addition to Poydras Home on Magazine Street on Thursday, signed by residents and supporters looking forward to its completion next summer.

Poydras Home today capped off one phase of construction on its addition, raising the final steel beam into place on the three-story structure that will be Oak House at Poydras Home on Magazine Street Uptown.

The beam was signed by residents and supporters before it was lifted high in the sky, topped by an American flag and an evergreen branch.

Construction began on the 27,000 square foot addition in April, 2012, and is expected to be complete next summer. It will provide 33 assisted living residences at the venerable New Orleans icon, which has been part of New Orleans since it first served as a home for orphans in the early 1800s.

New residences include 11 apartments for assisted living and memory support, answering a growing need for those services in the New Orleans area. Renovations are also underway for new dining areas, a spiritual and cultural center, and therapy gym.

The history of the topping off ceremony is one of the construction industry’s oldest traditions. Attaching a tree and a flag to the last beam before it is hoisted into place symbolizes growth and good luck.

Founded in 1817, the Poydras Home works to respect and preserve the dignity of the human spirit among the elderly by continuing the legacy of care through quality supportive services for the elderly, promoting understanding for their particular needs and advocating on their behalf. Poydras Home is located in the heart of Uptown at 5354 Magazine Street. Visit www.poydrashome.com or call 504-897-0535 for more information. 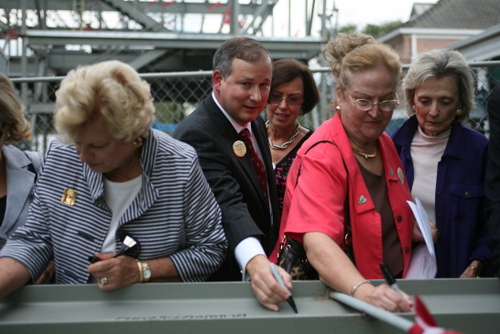