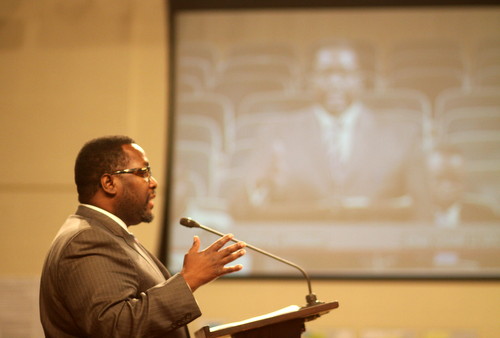 Actor Wendell Pierce plans the next location of his fresh-food convenience store concept, Sterling Express, for Tchoupitoulas near the old Market Street power plant in the Lower Garden District, but the proposed gas station he wants to put it in received a split decision from a city panel Tuesday on its request for two bays for large trucks.

A drawing of the proposed Sterling Express building on Tchoupitoulas submitted to the City Planning Commission.

Pierce’s first Sterling Express was featured in March in the New York Times. For this location, his partner Troy Henry had planned to build a gas station at the corner of Tchoupitoulas and St. James with 12 pumps for normal-sized cars and two bays for large trucks that serve the industrial businesses along the river.

The City Planning Commission staff, however, told Henry that the current Mixed Use zoning in the area does not support gas stations, and would need to be amended to allow them. The city’s proposed amendment, however, would have allowed only gas stations that do not serve semi trucks.

After hearing from Pierce and Henry, the commission split on several votes as to whether the truck bays should be allowed at the gas station. The matter will now go to the City Council for a final decision.

Also on Tuesday, the City Planning Commission heard a proposal for another Uptown project, the Core USA office/Leonidas House community center at the corner of Leonidas and Willow in west Carrollton. It recommended approval of that project by a 5-1 vote.