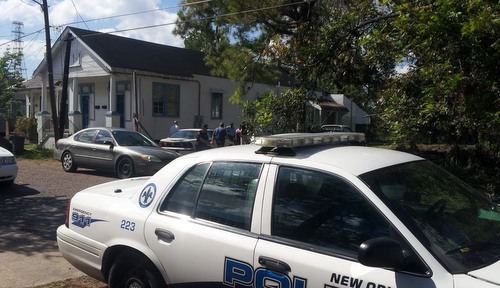 Police surround a yard in the 1700 block of General Ogden where a vehicle stolen in a carjacking on Willow Street was found Monday afternoon. (Robert Morris, UptownMessenger.com) 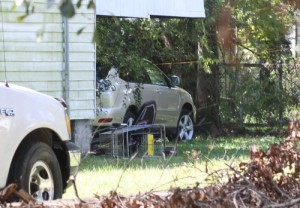 A gold SUV that was stolen in a Willow Street carjacking can barely be seen from the road where it was stashed behind a home on General Ogden. (Robert Morris, UptownMessenger.com)

A woman’s SUV was stolen from her at gunpoint Monday afternoon on Willow Street in Central Carrollton, but police located the vehicle shortly afterward stashed behind a home on General Ogden Street.

The carjacking took place around 1 p.m. near the corner of Willow and Adams, said the victim’s husband. The carjacker took her gold Lexus RX 350, but did not harm her, he said.

“She was out cleaning her car, and a kid walked up to her with a big gun, stuck it in her face and said to get away from the car,” said her husband, who asked not to be identified.

The area around the 1700 block of General Ogden is known as a dump site for stolen cars, so officer looking for the stolen vehicle began patrolling the area on a hunch and found it behind a home there, police say. It was undamaged and had already been abandoned, and police say it’s unclear why it was left there or whether the carjacker intended to return for it.

No description of the suspect was immediately available as the case remains under investigation Monday afternoon.

One thought on “Carjacking reported on Willow Street in Central Carrollton”