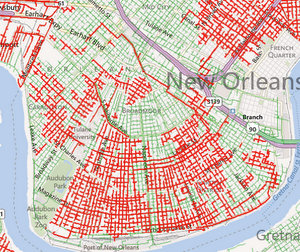 With Hurricane Issac’s winds and rain long gone, New Orleanians around Uptown and the entire city have been left to ask, where is the electricity?

Because the Entergy maps have proven themselves to be unexpectedly unreliable, Uptown Messenger is building our own map of outages and restored areas, based on firsthand reports by our readers. We’ll also include significant hazards that may still be affecting the public. To add or update information, either tweet it to us @UptownMessenger, or email it to uptown@nolamessenger.comHurricane Isaac aftermath, live updates (Saturday, Sept. 1)