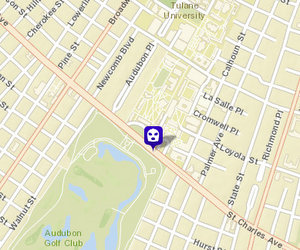 Three teens near the Audubon Park swings on St. Charles Avenue in front of the universities were robbed at gunpoint Monday night by a trio of masked men, police say.

The victims — a two 18-year-old women and a 19-year-old man — were in the 6400 block of St. Charles around 11:30 p.m. when they were approached by three armed men demanding their belongings, according to the initial police report. They gave up two purses and three cell phones, and the gunmen fled.

NOPD released additional information on the case Tuesday afternoon, including descriptions of the suspects as all between 5-foot-10 and 6-foot-1 in height, wearing all black clothing, ski masks and gloves and fleeing into Audubon Park:

On Monday, September 24, 2012 at approximately 11:20 P.M., the victims were in the 6400 block of Saint Charles Avenue at Audubon Park by the park swings. At that time, three unknown black males approached the three victims and rob them at gunpoint where the suspects took property from victims. The suspects then fled on foot into Audubon Park, making good of their escape.

[Note: This article was first published at 11:58 a.m. Tuesday and updated with the additional information at 4:04 p.m.]

3 thoughts on “Three teens robbed at gunpoint on St. Charles Avenue in front of universities”