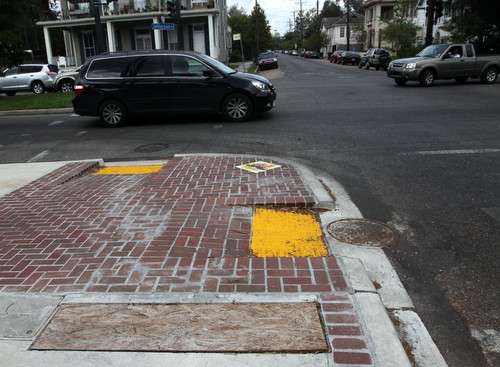 A piece of plywood covers a hole in the cement at the corner of Freret and Jefferson. City officials are debating whether this “bumpout” installed during the streetscape project impedes traffic and should be removed, said leaders of The New Freret business association. (Robert Morris, UptownMessenger.com)

City officials remain unsatisfied with the quality of the work done to the sidewalks at corners along the Freret corridor, but they have yet to decide what exactly they will fix or how long the repairs will take.

The project was intended to be a cosmetic makeover of the Freret corridor similar to the work done on Oak Street, installing large rounded sidewalk corners to make crossing the street easier for pedestrians, new landscaping and even promotional signage. Individual items were slowly stripped out of the project over time, the start date was delayed for months, and Monday night’s meeting marks the fifth in a row over a 15-month period in which the Freret merchants have expressed concerns about ongoing problems with the project.

Since well before its start, the businesses have felt shut out of input on the design of the improvements, the timing of the construction and even basic information such as a start datewere shocked by how long individual businesses were blocked as repairs to single corners dragged on for weeks, and three months ago began asking why corners were having to be rebuilt multiple times. 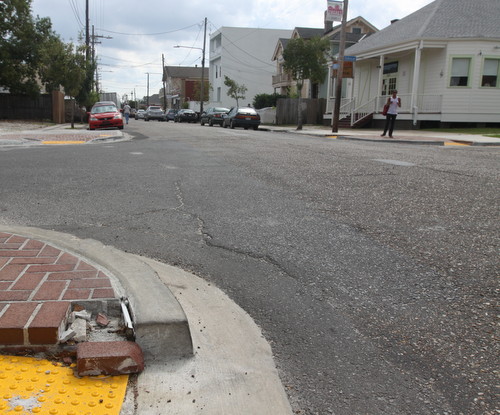 A brick lies in the handicap ramp at the corner of Freret and Valmont, one of the new “bumpouts” built as part of the corridor’s streetscape project. City officials say a number of repairs need to be made before they can accept the work as finished. (Robert Morris, UptownMessenger.com)

Now, most of the corners are have been filled in, but Department of Public Works director Col. Mark Jernigan told The New Freret business and property owners association on Monday evening that the project is still unfinished. City officials just recently walked the length of corridor and inspected each corner, compiling a large list of needed repairs, he said.

“There’s still some things at each of the corners that need to be done,” Jernigan says. “I’m still not happy with the quality of work that’s been done.”

Technically, the contract calls for the project to be complete by Sept. 19, but Jernigan expressed doubt that he would be able to close it out by then.

“We’ve got some more work to do before I feel comfortable enough where the city’s going to accept the project from the contractor,” Jernigan said. “We have some work to do, and we’ve got a longer list than we had three weeks ago.”

That list is still being prioritized, Jernigan said, so it has yet to be decided how long that work will take.

“The workmanship on my corner was really bad,” said Chip Apperson of High Hat Cafe, which was blocked for a full month around the busy Jazz Fest time. “If things start to crumble next year, who do I go to?”

The contract has a year-long warranty after it has closed, Jernigan replied — but he reiterated his pledge to ensure that each corner is properly finished before closing the contract out.

10 thoughts on “City “not happy” with streetscape work on Freret, but no timetable yet for completion”