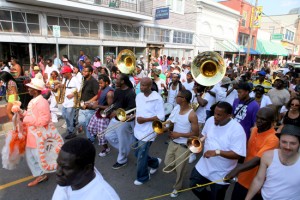 A proposal on the agenda for Thursday’s meeting of the New Orleans City Council would create a new permit and fee for vendors at second-line parades, making them responsible for litter around them and stopping them from selling alcohol at the events.

Specifically, the ordinance would create a new class within the city’s “transient vendor” section of code for “Social Aid and Pleasure Club occasional vendors” for anyone who sells prepared or packaged food at second-line parades. It would require a permit from those vendors, prevent them from being at any given location 45 minutes before or after the parade passes it, prevent them from selling alcoholic beverages, and require them to post a menu, keep a trash can nearby and pick up all litter in a 10-foot radius from their spot.

The fee for the permit is listed as $50 in the ordinance, but Clarence Bickham, legislative director for Councilwoman Diana Bajoie (who is sponsoring the ordinance), said that figure is now planned to be reduced to $25. Selling alcohol, Bickham noted, requires a separate license from the city Alcohol Beverage Control board. Bickham said the mayor’s office drafted the legislation.

“He brought it before the council and our council person agreed with it,” Bickham said.

Tyler A. Gamble, a communications manager for Mayor Mitch Landrieu, confirmed that the administration created the ordinance, and said that vendors were included in its drafting.

This is a new ordinance that amends the existing Transient Vendor permit to include Social Aid and Pleasure Club vendors. Though the ordinance currently states a fee of $50, it will be amended down to $25. This is consistent with other fees and for the type of activity. It is not an ABO permit. Anyone who sells alcohol needs another type of permit from the City and from the State. We support this ordinance and have worked with the vendors to create it.

Other vendors have to pay a $500 fee, but the ordinance specifies that second-line vendors would not have to pay that amount — only the $25, said Scott Hutcheson, the mayor’s advisor on the cultural economy.

The City Council is slated to begin its meeting at 10 p.m. Thursday.