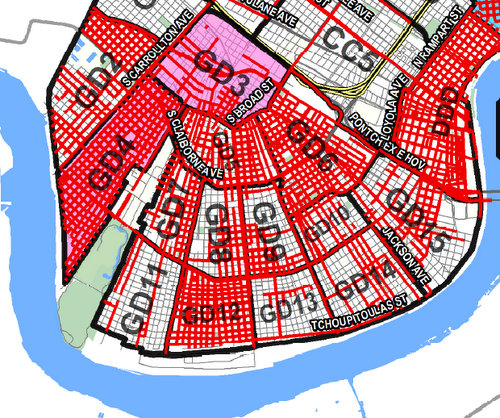 Streets marked in red had their “first pass” completed by Monday, and the purple-shaded zones indicate Monday’s deployment. (via city of New Orleans)

A map of debris collection since Hurricane Isaac released by the city Monday shows strong progress in Uptown’s university area, Broadmoor, parts of Central City, and on either side of Magazine Street between Jefferson and Napoleon. In other many neighborhoods from the Lower Garden District to Audubon Park, however, the map indicates that debris contractors have yet to make their “first pass.”

The map (which can be viewed in full here) was distributed as a part of a news release Monday afternoon about the city’s progress picking up the debris:

Today, the City of New Orleans updated residents on post-Isaac debris and garbage clean up. Deputy Mayor for Operations Michelle Thomas is leading a comprehensive, cross-sector coalition of City departments, private contractors and public and private sector partners to clear the city of debris left behind by Hurricane Isaac.

Hurricane Isaac generated a large amount of debris throughout the City of New Orleans. City workers and contractor crews have been working diligently since storm debris collection began and have collected 118,075 cubic yards of debris citywide.

“We are continuing to deploy crews and utilize all of the resources that we have at our disposal to conclude a compelete cleanup of debris following Hurricane Isaac,” said Deputy Mayor for Operations Michelle L. Thomas. “We have made significant progress and are committed to gettings things back to normal as soon as possible.”

As storm debris removal crews continue their push to collect all debris, City officials are urging all residents to have storm related debris ready for removal and placed in piles. Crews will make as many passes over the entire city as is necessary to complete the debris clean-up.

Regular garbage pickup resumed on Friday, August 31 and is currently on the normal schedule. Regular trash contractors have been instructed to pick up black bags. Black bags that were not collected on previous trash collection passes will be addressed in supplemental passes.

In order to help the collection contractors differentiate storm debris from garbage, we ask that residents separate garbage and storm debris piles to make collection easier. The main reason for the separation is that various types of solid waste can only be disposed in certain landfills.

Multiple passes are being made by different vehicles to collect the various types of debris.

Residents are reminded to please leave garbage curbside. Do not place debris and trash on the neutral ground.