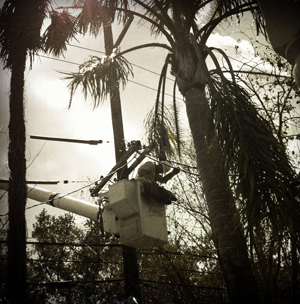 A utility worker makes repairs Monday from a bucket truck on Tchoupitoulas between Henry Clay and Calhoun. (photo courtesy of Nicole Williamson, via Twitter)

Entergy had all the reason in the world to bow out of a Tuesday-night presentation before the Audubon Riverside Neighborhood Association scheduled before Hurricane Isaac, group leaders noted. So when a manager from the utility showed up and began taking questions, the small audience gave him a gentler reception than the Entergy CEO had received before the City Council earlier in the day.

When Entergy first arranged to come speak to the group, it originally intended to give a routine presentation of energy-saving programs and community-outreach initiatives, association leaders said. But when Kerry Jones, a district community service manager for Entergy New Orleans, got up to speak, he said he’d begin by taking questions about the storm response.

The neighborhood lost power for as long as anyone else — from late Tuesday or early Wednesday until Saturday or Sunday, for most — so their questions were the same as everyone else’s. Why did it take so long to restore? How is the work prioritized? What were those workers doing who didn’t look busy? Why did it take them so long to get started? Why didn’t the texting system work?

One audience member said he was told by the out-of-town linemen that the Entergy system was grossly out of date. Upgrades cost money, Jones replied, pointing out that the utility has actually been lowering rates for New Orleanians for several years.

“We’ve had rate decreases, but we have to work with what we have,” Jones said.

Another said he felt deceived by the pre-storm assurances about thousands of linemen waiting to hit the streets when the storm passed — he thought they would go to work immediately, but instead seemed to be waiting on instructions Thursday. And another said his confidence in Entergy CEO Charles Rice’s ability to manage so many people was “shaken,” and said someone with more experience would have paired local linemen with those who came to help, to make sure every team of workers had the benefit of local experience.

But while many of the comments were critical, they largely lacked the vitriol that was displayed by some New Orleanians earlier Tuesday at a special hearing called by the City Council. Still in his short-sleeved work shirt from a day in the field, Jones took all the criticism in stride, pledging to bring the residents’ suggestions back to company management after the meeting.

Association Vice President Tim Betbeze said afterward that the board was somewhat surprised that Entergy kept the appointment. Though neighbors were frustrated by the loss of electricity, he said, most likely felt that neither Jones nor other Entergy employees had any control over any policy problems that led to the long days without power after the storm.

One thought on “Entergy representative fields questions from neighborhood”