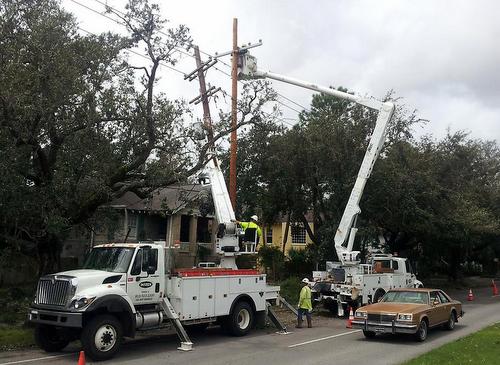 Now that the winds of Hurricane Isaac have blown through our lives, as we fill out insurance claims and apply for recovery funds, we should also look back at the performances of public officials and private companies such as Entergy during the storm.

Mayor Mitch Landrieu, Jefferson Parish President John Young and Kenner Mayor Mike Yenni were all outstanding. Landrieu, in particular, has a gift for figuring out what is relevant and urgent in crisis situations and then creating press conferences that bring together all the right people with all the right messages for the public. One need only remember the ineptitude at this of former Mayor Ray Nagin and former Jefferson Parish President Aaron Broussard to appreciate Landrieu’s abilities.

Plaudits, in our opinion, were also due the New Orleans Police Department, the Jefferson Parish Sheriff’s Office, the Plaquemines and St. Bernard Parish Sheriff’s Offices, the municipal police departments of Jefferson, the New Orleans and Jefferson Fire Departments and the Emergency Medical Technicians throughout the region. This is especially relevant for the NOPD and Superintendent Ronal Serpas, particularly when we recall the total breakdown of discipline and murderous performances by the NOPD during Hurricane Katrina.

From our perspective, one of the points made clear by Isaac is that now and for the future, New Orleans and the region surrounding it (including the River Parishes) is truly a coastal city and region. The barrier islands are gone. The wetlands are gone. They aren’t coming back. When a storm comes roaring at us, there is nothing to slow it down or give it pause. The $15 billion federal levee system, built after Hurricane Katrina, performed well, thank goodness. But those outside the federal levee system were in big trouble. Everyone deserves to be protected. More levees need to be built in the surrounding areas.

For many, the most troubling aspect of the entire Isaac experience was the performance, or lack thereof, from Entergy. Let us put that in perspective. Entergy in ordinary times is the most valued corporation in our region. Their people are competent and often their presence in the community is gracious. Entergy is incredibly generous, helping to support hundreds of non-profit organizations and groups in the region. But, this time, for this hurricane, Energy screwed up colossally. Apparently, a decision was made at some crucial corporate level that Entergy would share as little information as possible about its plans to restore power in the region in advance of the storm. Both John Young and Mike Yenni felt they were mistreated and not given the information they needed to inform their constituents of Entergy’s plans for Jefferson Parish and the City of Kenner. They were and are still furious.

Because Entergy did not fully share information, people throughout the region, including Uptown New Orleans, were also furious because they didn’t have a clue as to when their power would be restored. A factor in this was that because Hurricane Isaac was labeled a “Category 1 storm,” relatively few residents evacuated. This meant that after the storm, they were sitting at home without power while the food in their freezers turned rancid, hoping without success in most cases to get some word as to when the Energy trucks would be in their neighborhood.

Special credit goes to New Orleans Councilwoman Cynthia Morrell who called an emergency meeting of the Utility Committee that ended up going on for four hours. All the Council members asked great questions. Allan and Danae had different opinions about the response of Entergy’s top brass to the questions of the Council and the public. Allan thought Energy’s attitude was arrogant while Danae thought by and large they offered credible explanations.

We are also interested in learning how this storm will lead to more infrastructure preparations – replacement of rotting poles, better maintenance of trees to keep branches off power lines, etc. How much of their budget will Entergy be willing to invest in infrastructure improvements? Or will citizens be willing to pay extra for these services if it meant their power would be more likely to stay on during storms? Also, how will Entergy change their staging protocol so they can get more workers into the region quicker, despite snarling traffic?

We believe that Entergy is going to pay a steep price for their less-than-transparent performance during Isaac in the way that company is viewed by the public. We think they’ve lost a big measure of credibility. And, we think that Corporate Goal Number One at Energy prior to the next hurricane that comes our way ought to be a completely new plan for sharing with public officials and the community the details of their response plan and plenty of assurances that Entergy, now and forever more, is one of us — not apart from us.

Allan Katz spent 25 years as a political reporter and columnist at The Times-Picayune, and is now editor of the Kenner Star and host of several televsion programs, including the Louisiana Newsmaker on Cox Cable. Danae Columbus is executive producer of Louisiana Newsmaker, and has had a 30-year career in public relations, including stints at City Hall and the Dock Board. They currently work for the Orleans Parish School Board, and among the recent candidates who have been represented by their public relations firm are City Councilwoman Stacy Head, Lt. Gov. Jay Dardenne and state Rep. Robert Billiot.

One thought on “Allan Katz and Danae Columbus: Among others’ outstanding performances during Hurricane Isaac, Entergy loses credibilty”