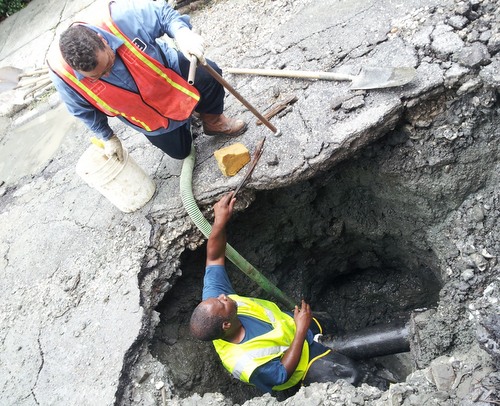 A worker from the Sewerage and Water Board of New Orleans hands up a file he used to clean a broken water main under Adams Street before applying a steel clamp to it to seal the hole. (Robert Morris, UptownMessenger.com)

Seated on milk crates on the Adams Street sidewalk, Maple Street Patisserie owner Ziggy Cichowski and Babylon Cafe owner Alexander Sakla cheered on the arrival of large yellow Sewerage and Water Board trucks around noon Friday, even as water along the stretch was being shut off in preparation of repairs to leaks gushing in the street.

“Faster, faster!” Cichowski cried out as the trucks rolled up, to laughter from a number of onlookers.

A hole in a water main under Adams Street began spewing water onto it and Maple Street on Thursday afternoon, and SWB crews fixed it Friday afternoon after shutting off water to Adams for an hour or so. After the repairs, the damaged portion of Adams remained closed to traffic to allow the sodden roadbed time to dry out, workers said.

Before crews could begin digging Friday afternoon, they had to wait to wait for other utility companies such as Entergy to arrive and mark their lines. While they waited, Cichowski jumped up and told the workers that lunch sandwiches were on him.

“Maybe it’ll help them get done faster,” he said, still laughing as he went inside the bakery to get the sandwiches together.

Sakla said Babylon’s water meter is on Maple, so he didn’t expect to lose water there. His apartments on Adams, however, were right in front of the break. 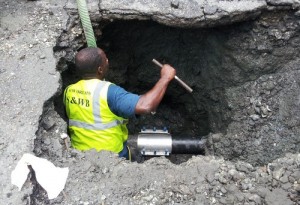 A metal clamp is applied to the water main to cover a hole that flooded Adams and Maple streets Thursday and Friday. (Robert Morris, UptownMessenger.com)

Despite some sediment in the street, SWB supervisor Derek Randolph said the erosion did not appear to have been bad enough to cause a street collapse. The leak was not likely caused by the Thursday’s downpour, Randolph said.

“It’s just old,” Randolph said. “It was just its time to break.”

The hole in the water main turned out to be on the bottom of the pipe, meaning that it shot water downward and created a crevasse under the pipe before rising back to the surface and breaking through the road, said Miguel Eguigure, another SWB worker. The workers fastened a steel clamp — what Eguigure called a “stainless steel Band-aid” — to the pipe to cover the hole.

“That stainless steel will last a long time,” Eguigure said. “Probably longer than that pipe.”

With the hole fixed, all that remained for the SWB crew was to fill the pit with a mixture of sand, rock and crushed asphalt to the surface, and leave the orange traffic barrels around it to give the roadway time to dry. Eguigure said he would also file a report with the SWB’s paving contractor, but could not say when they would arrive to pave over the damaged area. 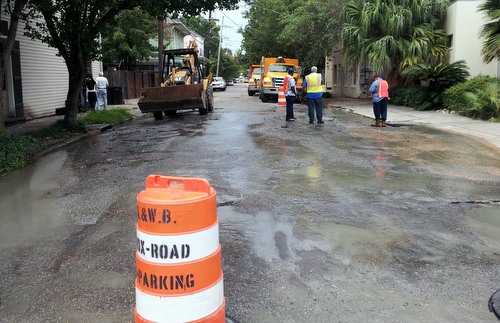 Sewerage and Water Board workers wait for utility companies to come mark their lines before digging up a broken water main leaking on Adams Street at Maple on Friday. (Robert Morris, UptownMessenger.com)