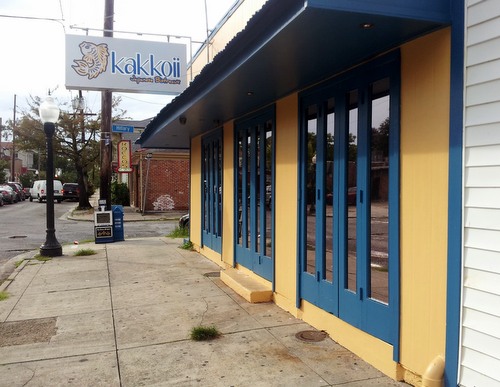 Kakkoii Japanese Bistreaux on Maple Street hopes to open later this month, now that it has won approval to sell alcohol with meals. (Robert Morris, UptownMessenger.com)

A new Japanese bistro is looking forward to opening later this month on Maple Street after winning City Council’s enthusiastic approval Thursday for its transformation of a previously problematic college bar.

Kakkoii Japanese Bistreaux, in the building at the corner of Hillary Street that was formerly the Doors bar, will offer a traditional Japanese menu of sushi, sashimi and hot dishes, said Toan Tran, one of its owners. The name is a Japanese term for something “awesome” or “cool,” he said.

“What makes us different from everyone else is a few of our designer rolls,” said James Vu, another co-owner, in a brief interview inside the restaurant Thursday afternoon.

When the location was still the Doors, it was one of four bars at that corner that have become the subject of intense enforcement efforts over the last year or so by the NOPD Second District and City Councilwoman Susan Guidry. After underage patrons were found inside two neighboring bars, Rocco’s and TJ Quills, they signed strict operating agreements with the city to stay open that include helping to pay for security in the neighborhood. Guidry said that when the Doors began receiving the city’s scrutiny, its owners opted to close instead.

“I’ve been working since I got into office to have those bars either comply or close,” Guidry said. ”

Members of Maple Area Residents still had concerns, however, that the sale of alcohol at the location would allow the restaurant to “morph” back into a bar. Guidry said that the conditions the restaurant agreed to — such as closing at 10 p.m. on weekdays and midnight on weekends — will keep it a restaurant.

“I have every confidence that this will be a very nice addition to the neighborhood, and will not morph into anything other than what it’s supposed to be,” Guidry said.

As the council voted unanimously to allow alcohol sales at Kakkoii, Councilwoman Stacy Head praised Guidry’s tenacity in improving the problem-bar situation on Maple, and Councilwoman Jackie Clarkson said the most important element moving forward will be strong enforcement of these agreements by the city.

Just down Maple Street, the Thai restaurant Singha Song was placed on the Council agenda for a suggested hearing Aug. 23 on its own, longstanding request to sell alcohol with meals. Their request has already won a favorable recommendation the City Planning Commission twice now — once back in March, then again in July after the May council standoff prevented any official action on the request until it missed its deadline.

In last month’s hearing, members of Maple Area Residents reiterated their concerns that the building owner’s track record leans toward converting the property into a bar. The Singha Song owners said that even the ability to sell beer and wine would give them a fairer chance to be competitive, so the City Planning Commission modified their approval to recommend beer and wine sales.

Finally, the Reginelli’s pizzeria move across Magazine Street also received the blessing of the City Council on Thursday, following a positive reception from the City Planning Commission in June and the Audubon-Riverside Neighborhood Association earlier this week.