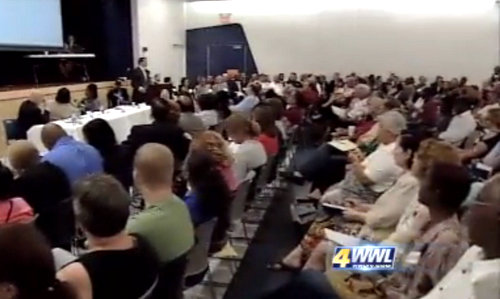 Hundreds of Uptown residents fill the auditorium at the Jewish Community Center on Monday night to discuss the city budget with Mayor Mitch Landrieu. (photo via WWL-TV)

All those issues are undeniably crucial to the city’s future, Landrieu said in a sort of pregame show for the budget he will unveil after a series of community meetings around the city. How to allocate a limited amount of money to each of those priorities is where the real difficulty comes in. Take the firefighters, for example.

“I have great respect for them, [but] they are just like everybody else when it comes to budget,” Landrieu said. “When you spend a dollar on them, you can’t spend that dollar on anybody else.”

‘Terrible’ streets
Perhaps the most frequently mentioned issue Monday night was the infamous condition of the streets of New Orleans. Landrieu described a city focus on major thoroughfares, such as Earhart and Magazine, but admitted that the interior streets are “terrible.”

One Uptown resident, Patricia Morris, said that the mayor’s “budgeting for outcomes” process is poorly named, given its focus on problems — such as filling potholes — rather than solutions, such as passable streets.

“The number of potholes filled is not an outcome,” Morris said. “An outcome would be a smooth street.”

The Department of Public Works is developing a long-term plan to fix interior streets, Landrieu replied, but it won’t be quick.

In the meantime, filling potholes is the only way to keep the roads passable, Landrieu said, and his administration has filled more than 50,000 of them.

“If you keep filling potholes, isn’t it smarter to do the whole streets? Yeah, but it’s a bucketload of money,” Landrieu said. “The reason we’re counting them is so you can know whether we’re doing what we say.”

Hand-in-hand with the complaints about roads were comments about streetlights that are out, and Landrieu reiterated his administration’s pledge to have every streetlight working by the end of the year.

The blight problem
Another consistent theme through the evening was the ongoing fight against blight. Several residents complained that it is too hard to get long-neglected buildings in their neighborhood back into commerce, while others said that too many buildings are being torn down, while empty lots are growing into jungles.

Patricia Gay of the Preservation Resource Center urged the mayor to plan for sustainability by protecting the city’s “built environment,” and joined several others in urging him not to understaff important entities such as the City Planning Commission, the Historic District Landmarks Commission and the Department of Safety and Permits that have direct bearing on development in the city.

“Blight is at the top of everybody’s list because it touches so many things,” Landrieu agreed.

Landrieu said his administration’s redesign of the city’s blight eradication efforts have resulted in about 4,500 properties being taken down, well on the path to reaching his goal of 10,000 by the end of his four-year term. But that’s still only a fraction of the estimated 45,000 blighted properties around the city, he said, and no number is really satisfactory to residents who still live next to them. 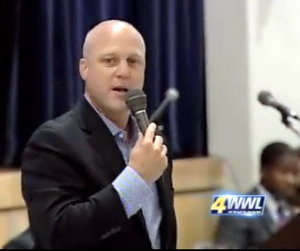 Mayor Mitch Landrieu responds to comments about the city budget from the audience. (photo via WWL)

Meanwhile, the city continues to inherit these empty lots, and is spending massive sums of taxpayer money to try to keep them mowed.

“You’re one of the biggest landlords in America right now,” he said to the audience. “You’ve got to cut their grass.”

A program suggested by one resident Monday night — to hire young people to cut the lots in their neighborhood — is already being tried in the Ninth Ward, Landrieu said, and he hopes to expand it citywide.

“More money will buy us more staff,” Landrieu concluded. “But you’ve got to tell me, ‘I’d rather do that than firefighters.'”

Fire fight
Landrieu’s repeated mention of firefighters was no accident. Firefighters and their supporters have begun a pre-emptive strike against what they believe to be major upcoming cuts to the fire budget, and were handing out yellow flyers before the meeting exhorting residents to support them.

Firefighters Association president Nick Felton noted that some of the companies that responded to a fire on St. Charles that very afternoon are slated for cuts, and a handful of residents asked when the fire station on Louisiana Avenue would be reopened. One speaker noted that a reduction in fire service could even exacerbate homelessness in New Orleans, as residents who lose their homes are left with nowhere to live.

Those comments were among the first Landrieu addressed, and he did so at length. He began by saying that local governments around the nation are going bankrupt — not New Orleans, he pointed out — and those that aren’t are laying off first responders and teachers. Second, Landrieu said that because his budget hasn’t been released, he hasn’t actually proposed any cuts — though the fire department is $1.1 million over its own budget for the current year.

Finally, Landrieu said, governmental employee pensions are another issue of nationwide concern, and the major issue underlying the fire budget is that the city of New Orleans is embroiled in a fight with the fire department over what the city owes the firefighters’ pension. Though he regards them as heroes, Landrieu said, money spent on their pension is money not spent on other city priorities.

“They think you owe them $150 million that somebody didn’t pay,” Landrieu said. “You feeling me?”

Regarding the station on Louisiana Avenue, Landrieu said he hasn’t yet studied how many stations the city now needs, whether that number is higher or lower than before Hurricane Katrina.

‘Nothing’ in Gert Town?
A number of residents decried what they saw as a lack of progress in Gert Town. Xavier University is rapidly expanding, they said, but little else is improving in the community.

“What sense does it make when the rest of the community is going to hell in a basket?” asked Larry Bannock, Big Chief of Gert Town’s Golden Star Hunters Mardi Gras Indians. “All you see is bulldozers and dump trucks. So many empty lots. You look at Gert Town and it looks like Katrina keeps going around, and going around.”

Pointing first at the rebuilt Earhart corridor, Landrieu then rattled off other projects on the edge of Gert Town, such as the Blue Plate Artists Lofts and the removal of blighted buildings in the area. He suggested, however, that more could be done if not for infighting between community nonprofits.

“Not only have we not forgotten Gert Town, we’re all up in Gert Town,” Landrieu said. “But a lot of folks in Gert Town have a hard time getting together for a common goal.”

‘Old, tired’ water lines
Looming increases to the Sewerage and Water Board rates — on the heels of increases to garbage fees and property taxes — were another topic mentioned several times. Landrieu, the president of the board, painted a picture of a major city system on the verge of possible collapse without a major intervention.

“One of the things all of you know is that this is an old, tired city,” Landrieu said.

Leaky before Hurricane Katrina and worse afterward, the city’s ancient water lines lose about 40 percent of the water that courses through them, Landrieu said, and the city is still in negotiations with FEMA for money to begin replacing whole lines rather than patching individual holes. Meanwhile, however, the power system has been heavily stressed, and the board’s bond rating is in danger of falling.

Some sort of rate increase, he said, is going to be mandatory soon to stave off these problems before they get even worse.

Landrieu largely sidestepped the issue, noting that Assessor Erroll Williams doesn’t work for him, but that he is attempting to fix inequities caused by years of separate assessors.

“It is important that people pay fair assessments,” Landrieu said. “We’re going through this agonizing process, and it’s going to take a few years to get it right.”

Crime
Notable for its omission was the lack of any strong call for more police on the street, and Landrieu certainly didn’t offer any. Only one speaker mentioned the city’s highest-in-the-nation murder rate, and the only real request for more resources for the New Orleans Police Department was from a handful of Central City residents asking that the crime cameras be reactivated in the NOPD Sixth District.

Unlike private security cameras in people’s homes or businesses, which can capture footage that is highly useful to police and prosecutors, public crime cameras have very limited effectiveness, Landrieu said. He’s not against the idea of reactivating some, but for now he believes the money would be better spent elsewhere.

Landrieu’s responses to the nearly 40 questioners from the audience Monday included a few other highlights:

A few suggestions by neighborhood activists on how to save money weren’t addressed directly, however.

If residents’ questions and the mayor’s responses were the main act Monday night, there was a significant sideshow about halfway through it. Well-known local-government critic Sandra Hester began her comment by telling the moderator that he might as well put away his timepiece, because she had no intention of stopping after two minutes, and Landrieu then intervened to tell the audience that they were in charge of stopping Hester when they wanted.

Hester replied that Landrieu’s comments “just extended the time,” as several members of the large crowd began telling Hester to stop talking. “This may be a dog and pony show for them, but it is serious to me,” she said in perhaps her only comment of the evening not about her own speaking time: “It is a tale of two cities, as it always has been.”

The audience began shouting at Hester, and she called them racists, mocking the moderator when he tried to intervene and then handing him the microphone derisively, noting that her powerful voice could fill the auditorium unamplified. After several minutes of an escalating shouting match between her and the audience, she was surrounded by police officers, and the meeting attempted to resume with speakers allowed to ask questions into the microphone over Hester’s discussion with police.

About three people spoke as the disturbance around Hester’s seat continued, until she finally cried out that she wasn’t afraid of the officers’ handcuffs.

“I’m not afraid of jail. They’ve been better people in jail than me,” Hester yelled, as she was led away and the audience broke into applause.