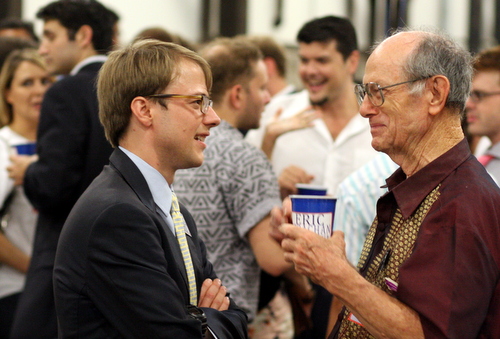 Five years ago, City Councilwoman Jackie Clarkson gave Eric Strachan his first job in City Hall. At a Thursday night election launch party, she gave him his first major endorsement as he seeks a seat alongside join her on the council.

In her endorsement, Clarkson invoked the legacy of the young candidate’s parents, Camille and the late Duncan Strachan, who were instrumental in the preservation and restoration of the Lower Garden District. Eric Strachan, Clarkson said, will continue that devotion to New Orleans.

“You want to elect somebody who was born and raised with that kind of commitment,” Clarkson said. “There is no substitute for it. I don’t know what government would do without these families.”

Clarkson hired Strachan as a staffer after he volunteered on her City Council bid in 2007, and he spent several years working in various roles in her office, then was later hired as chief of staff to then-District B Councilwoman Stacy Head. Clarkson also touted Strachan’s experience in city government in her comments.

Strachan pledged to make the “new energy” in New Orleans a central part of his campaign, observing that the evening’s venue had been converted from a warehouse to a film studio, and announcing that his campaign headquarters will be on the up-and-coming O.C. Haley Boulevard. He also returned Clarkson’s praise, and said he particularly learned from her style of behind-the-scenes peacemaking in crisis after crisis.

“You didn’t always see it in the newspaper, but Jackie Clarkson pulled it together,” Strachan said.

Strachan’s event at Second Line Stages in the Lower Garden District comes two weeks before the official qualifying period for the open District B seat, as he and two other announced candidates are all beginning to publicly define their campaigns.

Last week, Broadmoor Improvement Association LaToya Cantrell’s campaign sent out a news release outlining her record fighting the city’s “green dot” plan not to rebuild her neighborhood, and construction since then that has included Andrew Wilson Charter School and the Rosa Keller Library. Juvenile Justice Project director Dana Kaplan’s campaign also announced her own committee of supporters, which includes a number of social-justice advocates, and issued a personal biography that mentions work helping to create the office of the Independent Police Monitor.

Strachan’s campaign staff touted the turnout of more than 300 people on a stormy Thursday night for the first-time candidate, and sought to distinguish Strachan from his opponents through his native roots and his experience in city government. Many of his supporters at the event wondered aloud, however, how the possible entry of state Rep. Helena Moreno would affect the dynamic of the race, and whether her campaign would attract some of Strachan’s base.