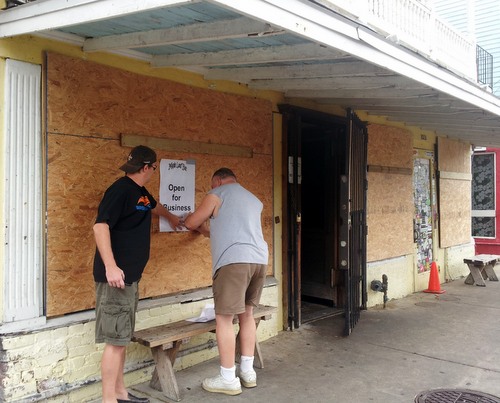 A passer-by lends a hand as Hank Staples affixes an “Open for Business” sign to the boarded-up front of Maple Leaf Bar on Oak Street. (Robert Morris, UptownMessenger.com) 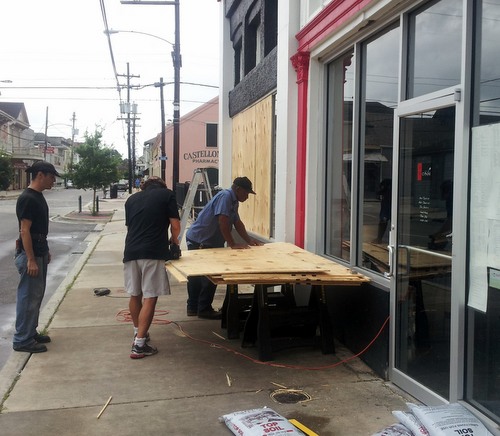 Employees board up the windows at Chiba, another Oak Street business planning to stay open as much as possible through the storm. (Robert Morris, UptownMessenger.com)

As the winds of Hurricane Isaac began picking up on Oak Street on Tuesday morning, boards may have covered the shopfront windows, but nothing could cover the owners’ spirits.

Dusko was busy putting plywood in the windows, but with a generator at the ready, he said he had no intention of closing.

“No reason to close,” Dusko said. “Serve a little sushi, couple of beers.”

A few feet away, Hank Staples said the Maple Leaf was ready for the storm. The storied bar closed only during the worst of Katrina, but never during Gustav, and often found itself serving police officers and National Guardsmen right next to area residents.

“Tonight, we’ll be open till it gets silly,” Staples said.

On Wednesday, Staples plans to reopen as soon as its possible, cooking burgers and “hurricane spaghetti” with meat sauce instead of meatballs. If the regular Wednesday night act is out of town, he’ll find someone else to take the stage, he pledged. 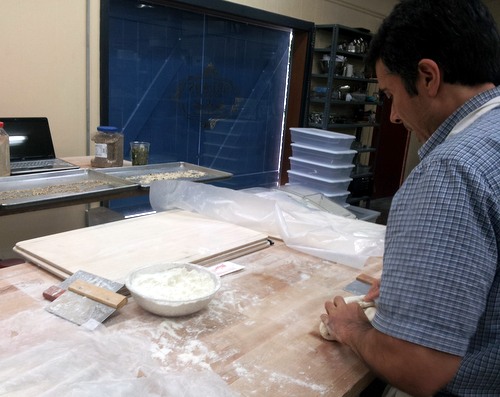 Behind heavy shutters covering the windows at Breads on Oak, Sean O’Mahony kneads the dough for a baguette levain. (Robert Morris, UptownMessenger.com)

Just a few blocks farther down, Sean and Chamain O’Mahony were keeping the ovens lit at Breads on Oak. The figured the brick building was probably safer than their house to ride out the storm, and since they were there anyway, they might as well bake.

“We decided to stay in the baker, and we can just bake until we lose electricity,” Chamain said as she worked on a batch of muffins.

Although the couple cooks every week for delivery to a long list of Uptown restaurants, they only open their storefront on Fridays and Saturdays. This Thursday, however, when the storm passes, they’ll have fresh baked goods ready.

“We’ll be here with bread and muffins for breakfast,” Chamain said.

“If they want anything, they can just knock on the door,” Sean said.