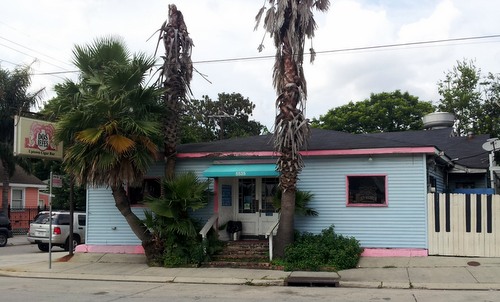 Dos Jefes bar on Tchoupitoulas was one of many targets in New Orleans of a federally-funded tobacco-compliance sting, but city officials decided Tuesday not to fine the establishment. (Robert Morris, UptownMessenger.com)

Early in May, a 15-year-old boy walked into Dos Jefes Uptown Cigar Bar on Tchoupitoulas, asked if they sold cigarettes and purchased a pack from the machine.

That boy was assisting agents with the state Office of Alcohol and Tobacco Control, however, and the purchase landed Dos Jefes in front of the city Alcohol Beverage Control board on Tuesday morning, along with several New Orleans other bars in the first wave of a three-year, federally-funded enforcement effort.

In the Dos Jefes case, the informant asked if the bar sold cigarettes, then headed over to the machine and bought them, testified a state Alcohol Tobacco Control agent. Dos Jefes Proprietor Shawn Stallard argued that his busy bartender barely even saw the teenager when he was asking, and that as soon as he realized the customer was young-looking, he signaled to Stallard and the kid was promptly ordered to leave.

The city alcohol board had more questions about the sting and their role punishing it than about the sale of the cigarettes. Board member Jerry Speir, for example, questioned whether the Alcohol Beverage Control board even had jurisdiction over such violations, though the city attorney explained that restricting sale of tobacco is a condition of the alcohol license.

After about a half hour of discussion, alcohol board members decided that by adding a doorman specifically tasked with checking IDs, Dos Jefes (which two years ago was congratulated by the state ATC for passing a similar sting) had paid its penance and needed no additional penalty.

“I think the corrective action they have taken is enough to satisfy me personally,” said board member Nyka Scott.

The proceeding sheds light on charges still pending against two other popular Uptown bars, Cooter Brown’s and Snake and Jake’s Christmas Club, which are currently set for hearings in September. Both were caught in the same sting as Dos Jefes, said ATC agent Jeff Onstott, which is based on a three-year tobacco-compliance program funded by a grant from the U.S. Food and Drug Administration.

Many more bars have already sold to the ATC informants, Onstatt said, and their charges may reach the city docket soon. Wit’s Inn in Mid-City, for example, was fined $100 on Tuesday for a similar charge, with the board opting for the slightly harsher punishment because the 15-year-old made it in and out of the bar without anyone questioning his age.

After the hearing, Stallard said he appreciated the board’s judgment Tuesday, but was frustrated by the state’s decision to target him in a sting.

“We haven’t had any minors in there until he brought one,” Stallard said, criticizing the entire sting as an unreliable form of entrapment. “He’s taking the word of a 15-year-old kid.”