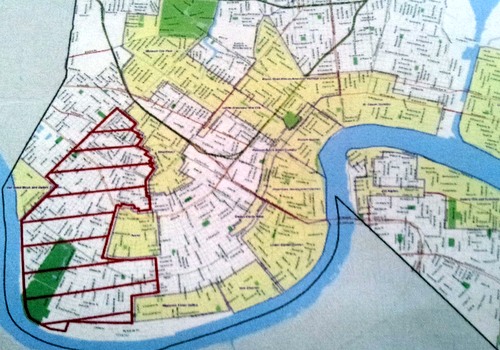 A map of the proposed Uptown-University cultural district, marked in red. Previously existing cultural districts are shown in yellow. (map courtesy of the state Department of Culture, Recreation and Tourism.)

A major section of Uptown from Carrollton to Napoleon Avenue could soon become exempt from sales taxes on sales of original art, and most property owners in the area could become eligible for state tax credits for nearly any kind of renovations they do to their homes under a program on track for approval this summer.

The proposed Uptown-University Cultural District would result in all areas between Carrollton and Napoleon avenues from the river to Interstate-10 being included in a “cultural products district,” a designation through the state Department of Culture, Recreation and Tourism intended spur creative activity in specific locations. The designation has already been approved by the New Orleans City Council and is slated for state certification in mid-August, said Gaye Hamilton, cultural-economy manager for the department, in a presentation to the Audubon Riverside Neighborhood Association during their monthly meeting Tuesday.

The program uses two primary financial incentives to encourage cultural activity. First, any original artwork or jewelry sold in the district is exempt from sales taxes. Second, to encourage the preservation of historic buildings in the district, any structural rehabilitation worth more than $10,000 to a building more than 50 years old is eligible for a state income tax credit of up to 25 percent of its cost.

New Orleans already has 20 cultural districts, and the new district would serve as a puzzle piece of sorts connecting four others: Oak Street, Freret, Broadmoor and Magazine Street. In fact, the Uptown-University District would essentially result in cultural districts along the entire length of the Mississippi River through New Orleans, and Hamilton said the city is a perfect fit for the program.

“There are so many little dense pockets of cultural activity that it’s a natural,” Hamilton said.

Many of the redevelopment projects the city has seen lately have been made financially possible by the tax credits, Hamilton said, and the preponderance of historic architecture in the Uptown area makes it a logical addition to the program.

The supporters promoting the district come from the major educational groups in the area, the Recovery School District, the Orleans Parish School Board and Tulane University. Their buildings — which include 10 major Uptown schools, such as Lusher, Wright, and others — would also be eligible for the tax credits, which those institutions could then sell to others, Hamilton said.

Over the summer, Hamilton is seeking input on the program from the public, and the ARNA board voted to offer conditional support, allowing time to notify association members. Assuming the district finds general support throughout the area, it will be certified in August, Hamilton said.

More information about the Cultural District program can be found at the CRT website. 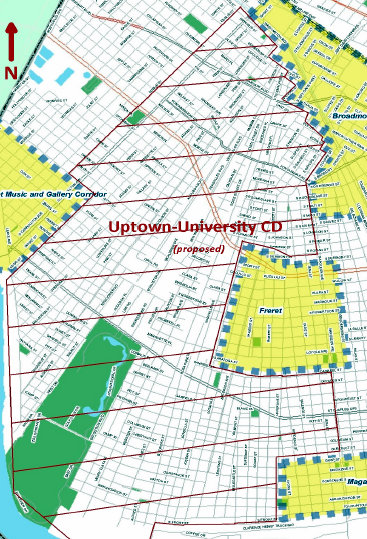 A closer view of the proposed district.