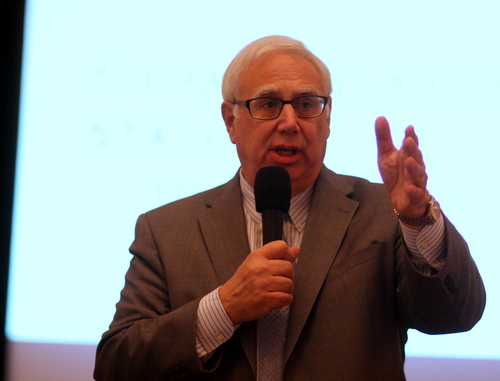 Tulane University officials pledged Wednesday night to reach an enforceable legal agreement with the city of New Orleans governing the activities and operations at its new football stadium — with hopes of resolving most of the issues in it by the end of August.

The proposed zoning district that would have forced Tulane to gain the blessing of the New Orleans City Council for its stadium was already off the table prior to Wednesday night’s community forum. On Tuesday, perhaps in tacit acknowledgement that such a district no longer had a viable path to passage, City Councilwoman Susan Guidry announced that she would withdraw the proposal at Thursday’s meeting of the City Council, and she opened Wednesday’s meeting with an explanation of her current stance on it.

“We feel at this time that there’s been a lot of movement on the part of Tulane,” Guidry said. “The council is going to remain involved, but the IZD has not been recommended, and we need to remove that and let this process continue as a voluntary process. … The only way this will be a victory is if we have a project that works with the neighborhood and that everyone’s quality of life is as protected as we can make it.”

Tulane has already made a number of promises at previous community forums that can likely be expected as the foundation of any agreement it signs voluntarily. For logistical reasons, the stadium won’t be used for events like rock concerts. The university will only host high school teams on weekends when it won’t be playing at home, meaning a maximum of one game per weekend. The university is also promising a Park-and-Ride system to handle the estimated 6,000 or so vehicles expected for sellout games, and a system of security and anti-litter measures in the neighborhoods around the stadium.

Tulane President Scott Cowen personally took questions from the audience at the Audubon Tea Room for about half an hour at the end of Wednesday’s meeting, generally assuring the neighbors of the university’s commitment to working with them. In a brief interview after the meeting, Cowen said he hopes a draft of the agreement will be written by the end of August, though at that point it may not include resolution to “every detail.” The document will be legally enforceable, he said, but it remains to be determined exactly what form it will take, such as a good-neighbor agreement or a contract.

The mayor’s office will facilitate the negotiations, university officials have said, leading to one tense moment in Cowen’s question-and-answer session. Audubon Boulevard resident Maura Sylvester had asked which neighborhood groups would be represented in the negotiations, and Cowen replied that the university would leave that up to the Mayor Landrieu as “the objective go-between.” Another man in the audience then shouted out that Landrieu — who had addressed the meeting early in the evening — was no longer in the room.

“He’s not really looking out for us,” the man said.

During the meeting, Cowen suggested to the man that individual neighborhoods should take the issue of their representation up with Landrieu individually, given the mayor’s interest in satisfying his constituents. Afterward, Cowen said the somewhat patchwork character of Uptown neighborhood associations has made knowing exactly who to negotiate with difficult for the university.

“It’s been a challenge to figure out, what are the neighborhoods, and do they have associations and proper representation,” Cowen said. “Without knowing that, it’s difficult to know who’s on the other side of the table.” 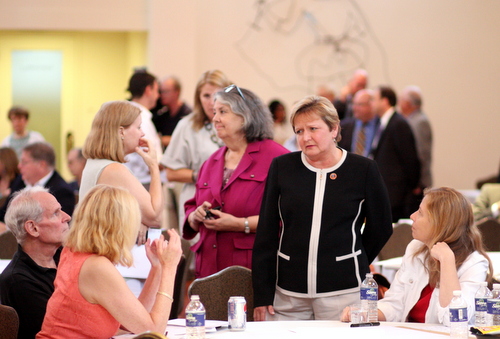 Much of the presentation at Wednesday’s meeting dwelt on familiarizing residents with what can be expected on campus during games. Preparations will begin in earnest 24 hours before kickoff and initial cleanup will last about four hours afterward. Most public access will be on the Calhoun and Claiborne sides of campus, while the Audubon Boulevard side will be restricted to emergency vehicles and a handful of media trucks broadcasting from the stadium.

Tailgating will be restricted to designated “hospitality zones” on most of the major university quads and around the Turchin stadium, though the university has also considered the neutral ground on the portion of Audubon Boulevard on the lake side of Claiborne, or nearby Versailles Boulevard. The “restricted access” zones in the neighborhoods around the stadium remain one of the most nebulous aspects of the stadium plan, however, and university officials said it needed enough attention to warrant another community meeting.

One of residents’ main concerns was how they could lodge complaints. University officials described an operational control center that could likely serve in that role, while consultant Doug Thornton of SMG suggested that perhaps the university could expand the stadium’s “Guest Services” staff to handle neighborhood issues as well. 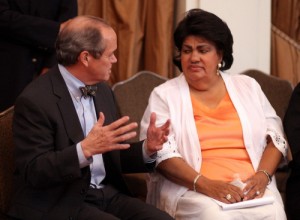 Tulane University board member John Williams and District B City Councilwoman Diana Bajoie talk during a break in the forum. Bajoie did not address the audience, saying she was only at the meeting to listen to the residents’ concerns. (Robert Morris, UptownMessenger.com)

University officials appeared intrigued by some suggestions Wednesday night, such as a “soft opening” period of a year or two when only a minimal number of games are scheduled (while the university gains experience in managing them) or incentives to encourage more use of the Park-and-Ride shuttles and less parking in the neighborhood. Other suggestions, such as the formation of a governing authority for the stadium, were less favorably received.

In the end, Cowen urged the residents to be patient as the planning process continues and more of the issues they were asking about were resolved.

“All I can pledge on behalf of the university is to do the very best we can,” he told one Audubon Boulevard resident who said she was frightened by what the stadium will do to her way of life. “Our pledge is to be the best partner we can be.”

Wednesday’s meeting included more than two hours of active dialogue with university officials on issues relating to the stadium. To review our live coverage of the discussion, see the box below.