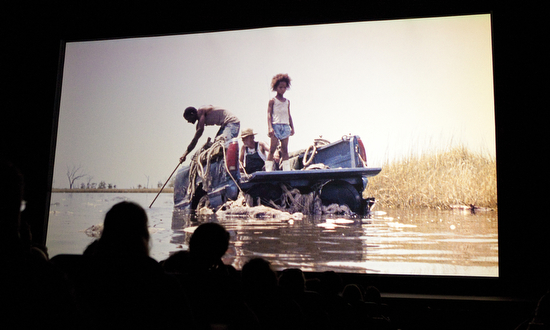 “Beasts of the Southern Wild” plays before a sold-out audience at the Prytania Theatre on Friday, July 6. (Sabree Hill, UptownMessenger.com) 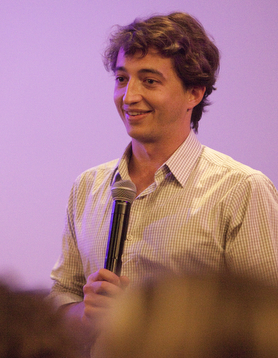 In “Beasts of the Southern Wild,” a little girl named Hushpuppy is told of her destiny to one day be “king of the Bathtub.”

On Friday night, as her creator fielded question after question about her, it was clear that the sold-out audience at the Prytania Theatre had been conquered.

The film, written and shot over three years on the outermost fingers of marsh in Terrebonne Parish, is a sort of fairy tale about bravery in the face of loss, Peter Pan told by Terrence Malick and Oliver Houck in the swamps. Between feasts and devastation, Hushpuppy (Quvenzhané Wallis of Houma, who was 6 when the movie was filmed) learns from her slowly dying father Wink (played by Dwight Henry of New Orleans’ Buttermilk Drop Bakery) the strength to fend for herself once she is alone in a land that is slowly disappearing.

The New Orleans Film Society screening at the Prytania Theatre and subsequent question-and-answer session Friday night with director Benh Zeitlin sold out well before its 8 p.m. showtime, wrapping a line around the block of moviegoers waiting for the doors to open. After the film concluded to a round of applause, hardly anyone got up from their seat, and when Zeitlin appeared at the front of the theater, he was immediately asked about the remarkable little girl who narrates much of the movie.

“How old is this little girl?” asked one of the first questioners. “How did you get a performance like that out of a 6-year-old?”

“She is a magical creature,” Zeitlin responded. They rehearsed the role with her for two months before filming began, but “the core qualities that you see up there were things she walked in with on day one of auditions. Whatever she’s thinking about, what her focus was, was always so tangible and so strong. She just emanates light when you’re around her — I wish she was up here so you’d understand.”

Hushpuppy’s metaphysical ruminations drive the film, but the character’s distinctive phrasing and dialogue were somewhat built around Wallis’ own speech patterns, Zeitlin said. For example, where the script originally called for her to describe the “particles” of the universe, Wallis’ attempts to rephrase the concept in her own words led to one of the film’s climactic lines: “When it all goes quiet behind my eyes, I see everything that made me flying around in invisible pieces.”

Even the film’s music, which Zeitlin composed in part, was heavily based on Wallis’ acting.

“It was really the thing that kind of unlocked the movie,” Zeitlin said. “We had to figure out what Hushpuppy was actually thinking about at any given moment, and score that. I think a lot about when you’re 6 and you’re walking down the street and nothing’s happening, but you’ve got the ‘Batman’ theme song playing in your head the whole time. … [The score] became what was broadcasting out of her head, and once we got that, the whole thing started to work.”

In some ways, despite a performance already spurring talk of what could be the youngest-ever Academy Award nomination, Wallis is a normal little girl, Zeitlin told the audience. Now 9, she loves to play with an iPod or watch the Disney Channel, and her home life has nothing in common with the untamed muck in the movie, he said. But her talent was immediately evident — Zeitlin had auditioned 4,000 girls around South Louisiana, but he noticed her immediately when she walked into the Houma library to audition, even though she was only 5 years old at the time (but pretending to be 6, as requested in the casting call).

The process of finding Wallis and Henry were emblematic of the patience and personal investment Zeitlin made to the film, based on his belief in “living the movie.” He decided to film in Isle de Jean Charles after long drives to the end of each bayou in Terrebonne Parish, and he lived at the nearby Pointe-aux-Chenes marina while he wrote it, he said. When it came time for casting, not just Henry and Wallis, but almost the entire cast was drawn from South Louisiana.

“We tried bringing in actors from New York and Los Angeles, and the chemistry wasn’t right. It didn’t feel authentic,” Zeitlin said. “We used the lives of the actors so much in the texture of the actual film, that people coming in who hadn’t experienced what it is to live down here — it wasn’t in their eyes. You just could see that there was something fake there.”

The film’s deep immersion in one of the most isolated parts of the country comes off as somewhat alien when the film is shown to audiences unfamiliar with area, Zeitlin said. Some viewers have thought its setting was completely made up, a Mad Max or Waterworld-style post-apocalyptic landscape.

“The further you go from here, the more people see it as a fairy tale,” Zeitlin said. “I showed it in Europe, at Cannes, and it was like, ‘Which planet is this film set on?’ Even when you go out to California, it’s like, ‘Is this in America?'”

Though the places in the film are real, its sense of abstraction was intended.

“We wanted to sort of heighten it and tell it as a folk tale so it could travel like that, and people could watch it as a fable and still understand that there’s a message in the film about why it’s important to stand by your people and your place,” Zeitlin said. “And so that, amazingly, translates in Poland — even though they think they’re watching Snow White or something.”

Zeitlin has been in New Orleans and down the bayou since the summer of 2006. Asked at the end of the conversation where his craft might take him next, he sounded unwilling to leave.

“I’m really planning on staying put and continuing this method of film-making. I love the family that we have down here,” Zeitlin said. “The world definitely tries to pluck you out, but we’re trying to use the success of the film to build a force field and keep it the same. So we’ll be around forever.” 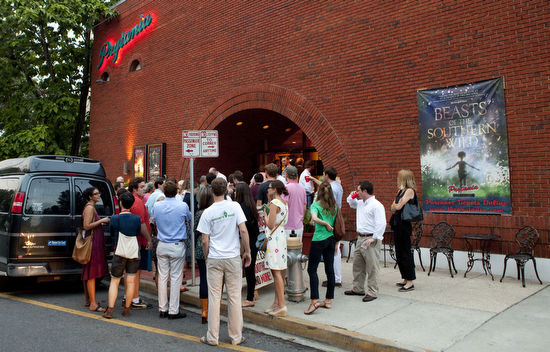 A crowd forms outside the Prytania Theatre before the screening of “Beasts of the Southern Wild.” (Sabree Hill, UptownMessenger.com) 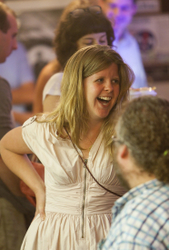 New Orleans Film Society director Jolene Pinder shown laughing with Robert Brunet before the screening, said she was “completely blown away” when she first saw the film at Sundance, and could not wait to show it at the Prytania.  (Sabree Hill, UptownMessenger.com) 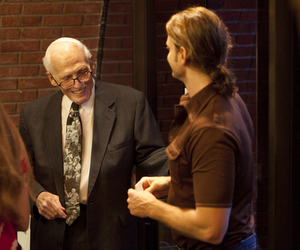 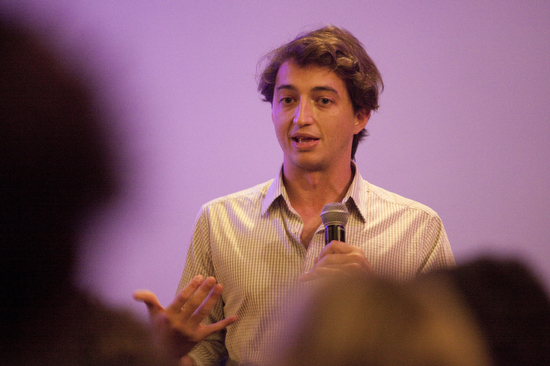 One of the night’s final questions was about the aurochs, massive prehistoric beasts freed from a melting iceberg that form a strong thematic presence in the film. “The beasts and the girls really were supposed to be a parallel, and almost part of one another, and almost the same characters in a lot of ways,” Zeitlin answered. (Sabree Hill, UptownMessenger.com)