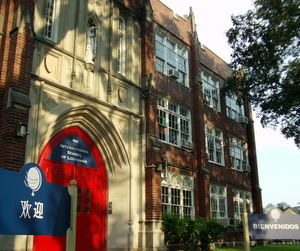 The International School of Louisiana is abandoning its plans to create the region’s first public-school program taught entirely in Mandarin Chinese next year for lack of enough students or a qualified instructor, officials said Wednesday.

Meanwhile, the school’s governing board continues to discuss where to put solar panels on its Camp Street campus, and where to find additional space for the overflow of upper-grade students expected there in the 2013-14 school year.

Mandarin | The school had only seven confirmed applicants for the Mandarin-immersion kindergarten class it hoped to create next year at the Westbank campus in Algiers, and had not yet located an instructor to teach them, officials said Wednesday night. Given those factors, school officials decided to cancel the program, folding the students signed up for it into Spanish-immersion classes instead, said ISL board president Andrew Yon at a meeting Wednesday night.

This is the second year in a row that the school has tried unsuccessfully to create a Mandarin program, he said, so ISL will not pursue the Mandarin track again unless administrators create a comprehensive program to fill the spaces.

The sudden change of course led to a change in policy Wednesday night, as the board voted to require that no changes be made to the language offerings at any of its three campuses — French and Spanish at Camp Street and Jefferson Parish, and Spanish on the Westbank — without their approval. Board members agreed with the rationale for canceling Mandarin, Yon said, but wanted a greater role in the process.

“We probably would not have changed the decision, but it’s our decision to make,” Yon said.

Camp Street | The location of solar panels proposed for the Camp Street campus continues to be an issue, as the consultant in charge of the project has recommended placing them on the school yard along Camp Street. Yon and other board members worried that such a location would be offensive to the Coliseum Square neighborhood, and also heavily shaded during the late afternoon, reducing their efficiency.

School officials said the consultants were making the recommendation in part based on the location of the building’s utility boxes, as well as to minimize the loss of play space in the yard. Camp Street principal Melanie Tennyson said she was sorry the panels couldn’t be placed on the roof, as was originally planned, but is eager to see them installed to defray the building’s $6,000 monthly electricity bills.

The board decided to ask the consultant if other locations might also be viable, and board member John Wettermark — a neighborhood resident and architect — volunteered to spearhead that discussion.

“My preference is to make sure there aren’t other options before we make a decision,” Yon said.

As the more of the school’s full lower classes stay on into middle school, the Camp Street building is running out of room. Almost all administrative offices have been moved out to the new Jefferson Parish building to make room for more classes, and next year, there simply will not be enough space for all the students expected to return.

With that in mind, the board has formed a committee to begin looking for satellite space nearby that either the youngest students or the middle school classes could move into. Board member Barbara Griffin said she had reviewed all the existing school buildings near the site — public and private — with local school-facility consultant Ken Ducote, but none seemed appropriate to ISL’s needs.

Yon urged the committee to meet its goal of identifying a space by December.

Among other issues discussed Wednesday, District B City Council candidate Eric Strachan introduced himself to the board, and the board learned of a surprise $81,000 property-tax bill sent by the assessor’s office for the Westbank campus and also discussed the threat that the city might deny it permission to add modular buildings to the Westbank campus next year. Enrollment at the Jefferson Parish campus has continued to climb to above 300 students, so that the school now expects to offer four sections each of kindergarten and first grade, as well as at least one section of each grade above into middle school.

To read our live coverage of the meeting, see the box below: