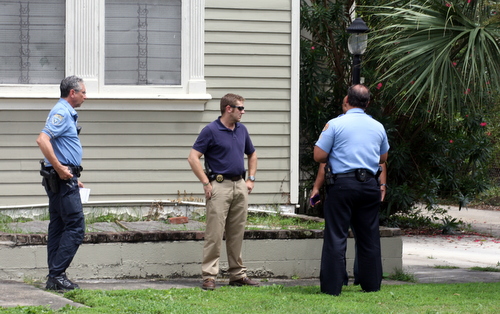 Two NOPD Second District investigators and a Tulane police officer speak to a witness in front of a home in the 600 block of Broadway, where a Tulane student was robbed inside her home. (Robert Morris, UptownMessenger.com)

A 20-year-old Tulane student had her sense of security in her own home shattered Thursday afternoon when two men forced their way in her front door, held her down on the floor at gunpoint and robbed her Broadway Street house.

Moments later, frustrated that her attackers might escape without her even getting a look at them, she ran outside, spotted them down the block, and chased them for a better look — and ended up getting the laptop they stole from her back in her gambit.

“I’m shocked,” the student said, looking back on her actions afterward. “I’m not that strong or courageous of a person. I simply did it because those guys, they should get caught. It’s just not right.”

The student was in her upstairs apartment in the 600 block of Broadway around 1:45 p.m., talking to a visiting friend, when she heard strange sounds coming from the door. She got up to see what the noise was, and suddenly two men burst in, she said.

“As soon as I went to the door, it was busted through and I had a handgun pointed at my face,” the woman said. “I was listening to music, talking to my friend, and the next thing I knew I have a gun in my face — one extreme to another.”

With the gun pointed to her heard, the men instructed her to get on the floor, face down, and not to move or make a sound. She couldn’t see or tell what was happening with her friend, but the men seemed to be taking any obvious items of value from her house, she said, including her laptop, phone and purse.

As soon as they left, the woman ran outside after them and spotted them down the block. Thinking that outside, in public, on a busy street with people around her she might be safer, she ran after the two men to get a better look at them.

“I wanted to get a more accurate description of what they looked like,” she said. “I definitely was afraid. I think it was a rash decision on my part, but I wanted them caught.”

As she neared them, she saw her laptop under one man’s arm, and began begging him to give it back, because it had all the lecture notes for her Political Science and Latin-American Studies classes on it. To her surprise, they handed it over.

“I asked for my laptop back, and they — oddly — gave it back right away,” she said.

She asked for her phone next, and they gave her that as well. Finally, she asked for her purse, and the men broke into a run to get away from her. She followed them up Broadway, onto Hampson and then onto Audubon, calling police on her phone but the two men parted ways out of her sight, she said.

Both robbers were college-aged black men with a medium-brown skin tone, clean cut with short haircuts. One was wearing a black T-shirt, black pants and a purple “I (heart) Haters” hat. The other was wearing a Hawaiian-print T-shirt with khaki pants, and he was carrying a camouflage backpack. Neither was especially tall, and both were slightly thin, with a skateboarder look to them — almost with a “kind of innocent” look to them, she said.

“I never thought it would happen to me, but it just did,” she said. “I wouldn’t wish this on anyone.”

As investigators looked for evidence around her home, the student sat on the porch steps with her head in her hand and quietly cried. She just moved into the apartment after the semester ended in May, her first time living off campus, and she said she vigilantly reads the university crime alerts in her email and takes sincere precautions to avoid being a victim.

“Broad daylight, Thursday afternoon — it’s totally wrong,” she said. “This is seriously not OK. I am very, very disturbed right now. … I just feel so powerless. That was just so degrading.”

28 thoughts on “Tulane student robbed in home invasion on Broadway, chases attackers and retrieves her laptop”