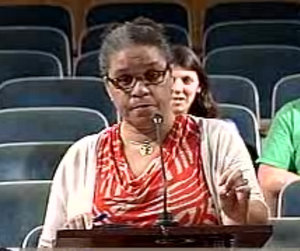 Lona Hankins, director of capital improvements for the Recovery School District, discusses the demolition of the Mary Church Terrell school before the Neighborhood Conservation District Committee on Monday.

A school that Gert Town residents have begged at repeated public meetings to see reopened was quickly approved for demolition by a city panel Monday.

Throughout the planning process last year for the allocation of federal school-rebuilding money, Gert Town residents begged education officials to reopen the Mary Church Terrell Elementary School at 3411 Broadway Street. In January, they brought the director of nearby Lafayette Academy charter school to say he could use the space to expand, and in July they argued that a school forms the heart of a community and could help the neighborhood recover.

The schools plan moved forward without a role for the campus, however, and on Monday, Recovery School District capital-improvements director Lona Hankins appeared before the city’s Neighborhood Conservation District Committee to request permission to demolish the building, “to remove blight from neighborhoods that are trying to recover,” she said.

Committee member Helen Jones pointed out that the demolition still goes against the wishes of many Gert Town residents.

“Kids [are] getting up at 6 o’clock in the morning, not getting home until late in the evening in that little area,” Jones said.

Hankins replied that the community meetings had made officials aware of those opinions, but that the Dunbar campus in the design stages in Hollygrove could serve some of those students.

“There is some concern about what we’re going to do,” Hankins said. “Right now we’re going to hold on to the land until there’s a better use for it.”

The request was approved 7-1 following about three minutes of discussion, with Jones the lone vote in opposition.

After the building is demolished, the site will be seeded and fenced in, Hankins said.