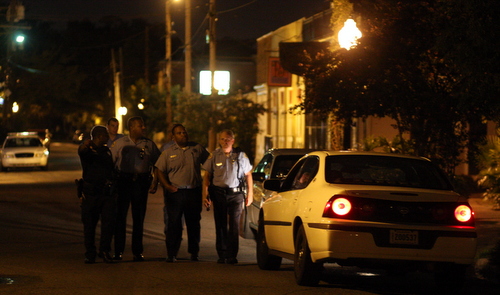 Officers with the NOPD Second District look along Maple Street for surveillance cameras that may have captured footage of a robbery that took place in the 7600 block on Monday evening. (Robert Morris, UptownMessenger.com)

An armed robbery on Maple Street on Monday night and a carjacking on Nelson about half an hour later may have been committed by the same group of men, police said.

Around 10:15 p.m., a woman in the 7600 block of Maple Street was robbed of her purse at gunpoint as she tried to go to her parked car, according to investigating officers. She was attacked by as many as three men, at least one of whom had a gun, and they were in a vehicle but she didn’t get a good look at it, police said.

About half an hour later, a victim unloading a silver Toyota Camry in front of a home in the 7700 block of Nelson Street was robbed, and the attackers made off with the car, police said.

The two robberies may have been committed by the same men, investigating officers said. They wore masks on their faces in both cases, and the robbers on Maple Street may have been trying to get the woman’s car, police said.

The locations of the two robberies were just over a mile from each other straight up a cross street such as Adams or Burdette.

Anyone who may have information about either of these cases should call Second District detectives at 658-6020.

11 thoughts on “Armed robbery on Maple, carjacking on Nelson may be the work of same suspects, police say”