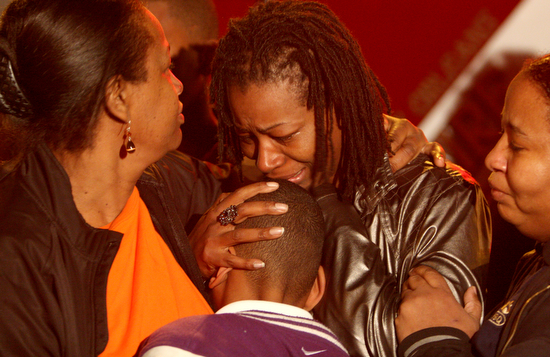 Latisa Lewis, mother of Errol Meeks, is comforted by family members as she cries at a vigil for her son Jan. 20, 2011. (UptownMessenger.com file photo by Sabree Hill)

A 26-year-old man was found guilty of second-degree murder Wednesday evening in a 2011 shooting that claimed the life of a 19-year-old known as a peacemaker and shut down a Freret Street trouble spot.

William Baham, 26, now faces an automatic life sentence for the death of Errol Meeks, who was killed after trying to break up a fight inside the former Friar Tucks bar on Freret Street.

“I’m definitely relieved,” said Meeks’ mother, Latisa Lewis, through tears as she left the courthouse Wednesday evening. “I know it won’t bring my son back, but it’s comforting to know [Baham] won’t take anybody else’s child.”

The three-day trial relied heavily on video footage from the club itself and other cameras on Freret Street that showed the shooting, as well as testimony from several eyewitnesses. Jurors deliberated for two hours Wednesday afternoon before returning the unanimous verdict, which Assistant District Attorney Christopher Bowman attributed to the 20 witnesses they heard from.

“I was not concerned,” Lewis said about the length of the deliberations. “I think the state did a wonderful job. The case was well-planned and well-delivered.”

Baham will be formally sentenced Aug. 16, but the only sentence for a second-degree murder conviction is life. His defense team, led by attorney Gregory Carter, said that Baham plans to appeal.

The complete news release from the district attorney’s office follows:

Baham retrieved a .40 caliber handgun from his vehicle and returned to the bar as Errol Meeks was exiting. The defendant confronted Meeks in an attempt to get Meeks to identify the other patron involved in the fight. When Meeks was unable to identify this individual, the defendant shot him once in the head and once in the back because he believed that Meeks and the other individual were from the same neighborhood. The murder was all recorded on the bar’s audio/visual surveillance system.

In response to the conviction, District Attorney Cannizzaro said, “This was not only a brutal crime but also senseless. Trial testimony revealed that Errol Meeks was an extremely peaceful young man who was ruthlessly executed for nothing more than being a Good Samaritan. I want to thank his family for sticking with the DA’s office during this trial. While we can never cure the pain that they were forced to endure, I hope they find some small measure of solace in this verdict.”

The defendant will be sentenced on August 16th. State law mandates that the defendant receive a sentence of life in prison without possibility of probation, parole, or suspension of sentence.