New Orleans police walk crime-scene tape around the site of a shooting in the parking lot of a McDonald’s on South Carrollton Avenue. (Robert Morris, UptownMessenger.com)

In the thick heat just before the sun began to set Tuesday afternoon, a middle-aged man stood on the Carrollton Avenue sidewalk with his wife and 8-year-old son and watched as crime scene technicians counted shell casings in the parking lot of McDonald’s.

“Sometimes I hate that I ever came back to New Orleans,” said 44-year-old Kenny Smith, a Gert Town resident who lives about three blocks from the latest shooting in his neighborhood. “You can’t even come to McDonald’s to get something to eat without worrying about getting shot at.”

About 5 p.m. Tuesday, a vehicle was driving through the parking lot of the McDonald’s in the 3400 block of South Carrollton, when a man with a gun ran up and started shooting, hitting a 21-year-old woman riding in the car, police said. The driver then took her to the hospital, where she was listed in stable condition with a gunshot wound to the back. 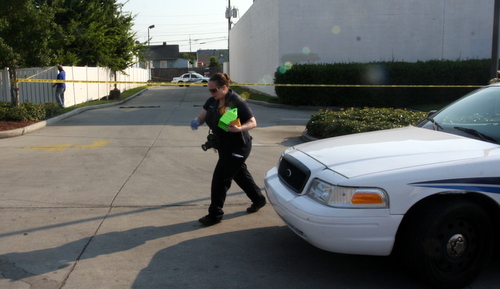 A crime-scene technician picks up the markers for shell casings in the McDonald’s parking lot. (Robert Morris, UptownMessenger.com)

At the edge of the parking lot an hour later, Smith’s son leaned on a bicycle while his parents watched the investigation drag on. The bicycle was a Christmas present for his son’s straight A’s at Lafayette Academy, but the boy has only ridden it twice since then, his father said: He can’t let him ride it out of his sight.

“People are tired of seeing this,” Smith said, as police surrounded the crime scene with yellow police tape and placed green markers over the shell casings. “How are we supposed to live in fear?”

Smith has lived in Gert Town for 25 years, and he still loves the neighborhood, he said. He knows all his neighbors and loves them all. But after a lull in crime immediately following Hurricane Katrina, the violence suddenly returned, just as bad as it ever was, or maybe worse.

Now, he said, he’s thinking about moving to Mississippi, “cutting out.”

Just as the New Orleans Police Department’s criminologists repeatedly state, Smith said the shootings in his neighborhood are done by ever-younger people, teenagers of only 16 or 17 years old who know the people they’re coming after.

“They don’t give a damn about life,” Smith said. “Nothing can be done about that.”

His wife and son said they wanted to head home, and Smith turned to join them. Despite his son’s good grades, Smith worries that he won’t see his 20s.