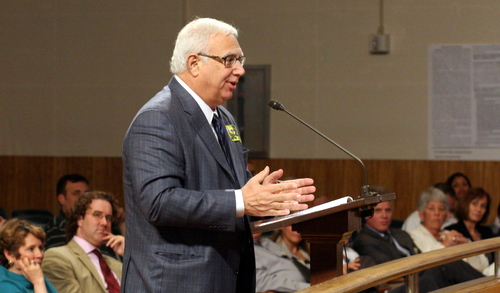 The law that allows Tulane to build a football stadium on campus without any oversight from city leaders may be out of date, and the construction project may raise serious issues that need more scrutiny, but the university ought not to be made to follow regulations that are not yet on the books, the city planning commission ruled on Tuesday.

By a 7-1 vote, the commissioners will recommend against creating an interim zoning district that would require universities to seek city permission for large construction projects. What remains to be seen is whether Tulane’s victory Tuesday is fleeting — as the same City Council members who voted to begin the IZD process can ignore the recommendation and vote to approve it — or if it provides a spark of momentum that builds into a win before the City Council as well.

The proposed stadium is a permitted use of Tulane’s land under its current zoning, so the interim zoning district was originally conceived by Councilwoman Susan Guidry as way to create a public forum and review of the project. The district was forwarded to the city planning commission by with the assent of three other council members, but the city’s planning staff drafted a report suggesting the district would be an improper way of settling the issues raised by the stadium.

The crux of the argument offered by neighborhood residents opposed to the stadium is that the IZD is necessary to bridge the gap between current zoning law allowing the stadium and the city’s Master Plan, which calls for more scrutiny of university building projects. The stadium will create a nearly 50-foot wall a mere 20 feet from residents’ property lines, and a host of traffic, noise and drainage issues with the project remain unresolved, they said. 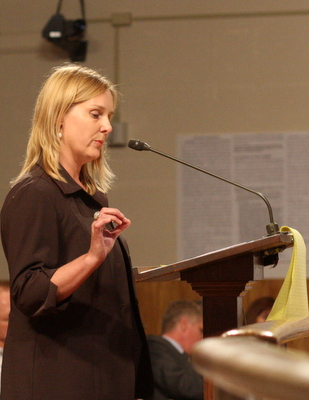 Jane Booth of Save Our Neighborhoods speaks on behalf of the zoning district. (Robert Morris, UptownMessenger.com)

Those issues, said Jane Booth of the Save Our Neighborhoods group, should be mediated by the city, not the university.

“We’re not saying, ‘Don’t allow the stadium,'” Booth said. “We’re saying, ‘You need to do what you do with every developer.'”

Tulane, however, reiterated its commitment to a series of public forums with the neighborhood. For example, at the next meeting (scheduled for Monday, June 18), Tulane will share a parking study that found the need for about 7,800 parking spaces for a sellout game of 30,000 fans, and will begin describing the park-and-ride plan the university is crafting to meet that need, said Tulane vice president Yvette Jones.

Taking a less confrontational tone than he did with the City Council last month, Tulane President Scott Cowen deemed the zoning district as unnecessary because of Tulane’s willingness to work with neighbors, likely to have unintended consequences because of the lack of attention to any university project other than the Tulane stadium, and unfair because it holds Tulane to the standard of proposed laws, rather than those that have been passed.

“We live with the laws we have, and in this particular case, we have the right to build this project on our site,” Cowen said.

That last argument proved salient to commissioners Craig Mitchell and Lou Volz, the only two to speak in favor of the project. Volz said he has serious questions about the project, and Mitchell said the gap between the current laws and the master plan shows the need for more resources in the city’s planning department, but both said they could only support holding the university to existing law.

Commissioner George Amedee, however, said the interim zoning district would be a reasonable way to address the “larger problem” of conflict between the current zoning laws and the master plan, and that he believed the planning staff could correct its technical problems easily. Amedee was the only commissioner to hold that position, however, based on the 7-1 vote against the district the commission ended with. Commissioner Robert Steeg, an attorney recently appointed to the commission, recused himself from the vote.

The interim zoning district’s fate had begun to dim well before the commission’s vote, however, when Mayor Mitch Landrieu received the power to appoint a representative to the District B seat on the City Council. If the four members of the city council who originally supported the district pass it, Landrieu can veto it, and his appointee Diana Bajoie will essentially hold the decision as five votes are needed to overrule a veto.