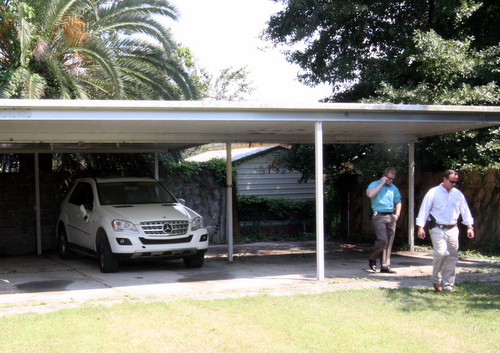 Detectives wait for crime-scene technicians to come examine an SUV stolen in a carjacking on Dublin Street that was later found stashed in a carport behind a vacant home on Cambronne. (Robert Morris, UptownMessenger.com)

A woman who was being robbed of her SUV just off of Oak Street was shot at by her attacker when she tried to run away, police said. The woman was not hit and her vehicle was found minutes later in a west Carrollton yard, but the gunman remains at large.

The woman was returning to her car parked about a block off of Oak Street near the intersection of Dublin and Zimpel streets about 1:15 p.m. Tuesday when a teenager wearing a fisherman-style hat and holding a silver revolver approached her from between two parked cars, demanding her purse and keys, according to a report from the NOPD Second District. The woman dropped her belongings and the gunman ordered her to pick them back up, but she refused and began running back toward Oak Street, police said.

As she ran, the robber fired a shot at her, then left in her white Mercedes SUV, the report states.

Dublin Street resident Dave Coll said he heard the shot and thought it was a tire popping, but stepped outside to see what happened and one woman running toward Oak Street and another woman backing her car in the same direction away from Zimpel. The robbery victim went into the Oak Street Cafe and asked the employees to call 911, and employees there said they thought the second woman in the other car had been trying to help the victim on Dublin when the robber fired his gun.

Coll said he was so surprised by the robbery outside his home that he didn’t believe it was even a gunshot at first.

“This really isn’t that kind of area,” Coll said.

A few minutes after the robbery was reported, residents in the 2200 block of Cambronne in west Carrollton saw an SUV being backed down the driveway of a house that had just been sold and should have been vacant, so they called police. Two men carrying bags got out of the SUV and into a black Jeep that appeared to be waiting for them, the residents said. When police arrived, they discovered the SUV to be the same one in stolen in the Dublin Street robbery minutes earlier.

The fact that the men in the SUV knew about an empty carport behind the house suggests that they are from the neighborhood, the residents said. “They knew who wasn’t home,” one woman said.

“I think it’s local people,” another woman said, referring to other recent incidents nearby. “This is too scary.”

Just on the river side of Claiborne and only two blocks from Palmer Park, the 2200 block of Cambronne has stately, well-kept houses behind tall black iron fences. Dorothy-Mae Flot, a resident who frequents neighborhood anti-crime meetings, said there are more homeowners than renters, and they try to keep an eye on each other.

“We try to keep the neighborhood safe and free of criminals, but every time there’s a different bunch of criminals,” Flot said. “The criminals are trying to outnumber us, but I’m giving them a hard time.”

The entire robbery troubled Brad Wilkins, the owner of Oak Street Cafe, as he watched the news cameras line his street to report on the outbreak of violence.

“This is an extremely isolated incident,” Wilkins said. “This kind of thing has never happened in the eight years I’ve been doing this.”

Oak Street is one of the safest locations in the city, he said. Police eat at his restaurant all the time, and even conduct foot patrols in the area. Locals likely won’t be deterred from visiting Oak, he said, but a robbery with shots fired in broad daylight in such a busy area reflects poorly on the city.

“Do I think it will hurt the street? No,” Wilkins said. “But this is not good.”