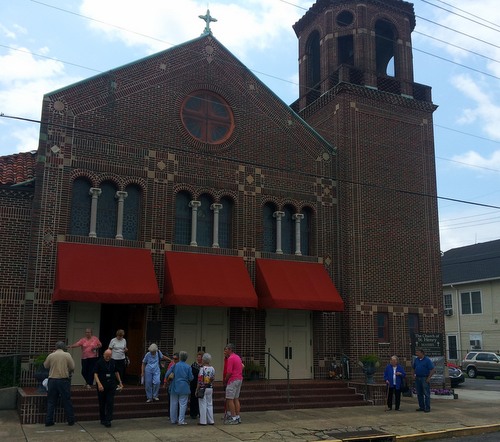 Parishioners of St. Henry's excitedly discuss the return of daily Mass to the church on Saturday morning. (Robert Morris, UptownMessenger.com) 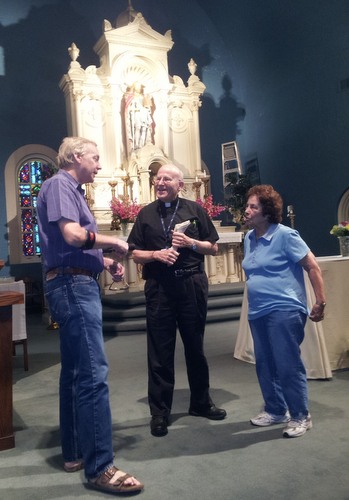 Father Doug Brougher, who was stationed at St. Henry's from after Hurricane Katrina until it closed in 2009, laughs with parishioners inside the sanctuary. (Robert Morris, UptownMessenger.com)

In January of 2009, as police forced St. Henry’s parishioners out of their 150-year-old sanctuary, Brenda Jobin removed from the foyer a plaque memorializing her son’s death in Iraq.

On Saturday morning, upon hearing Msgr. Christopher Nalty announce that weekday Mass would once again be celebrated at St. Henry’s — effectively reopening the church and reuniting a parish that had been torn by its closure — Jobin immediately ran home, grabbed the plaque from her living room, and returned Spec. Jeremy Heines to his place on the foyer wall.

“Now he’s back in church where he belongs,” Jobin said, her eyes shining.

Those same sentiments of return, belonging and joy were evident on all the faces of the 60 or so parishioners who heard Nalty’s announcement at the Saturday morning rosary service. For many, it was a surprise, as those in the pews whispered excitedly to late-comers that the church was reopening.

“Please extend to the people of St. Henry Church my pastoral concern and willingness to continue to work with them for the greater glory of God and the building up of this local church,” Archbishop Gregory Aymond wrote in a letter that Nalty read as the congregation applauded and cheered.

“Can you read that again?” one woman called out from the audience to happy laughter.

The daily mass will be celebrated at 6:30 a.m. Monday through Friday, beginning next Friday, June 15. The decision was only made in recent weeks and was largely practical, Nalty said — the large sanctuary at St. Stephen costs so much to heat or cool, nearly $100 an hour, that the daily mass is currently celebrated in the rather cramped quarters of the rectory. The smaller St. Henry sanctuary a block away will cost much less, and hopefully attract more parishioners — those who prefer to celebrate the mass in an actual church, as well as those in the neighborhood who had left the parish altogether over their frustration with St. Henry’s closing.

“There was a lot of pain in the closing of the parishes,” Nalty said. “Hopefully, this will be a moment of healing.” 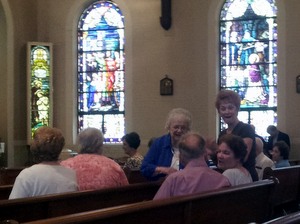 St. Henry's parishioners clap and sing "This Little Light of Mine" inside the sanctuary following the announcement. (Robert Morris, UptownMessenger.com)

Saturday’s announcement was steeped in symbolism. For many parishioners, Nalty said, one of the most significant aspects of the decision to return Mass to St. Henry’s means the return of the Eucharist, the communion table that represents Christ’s body — one woman in the pews cried out that “Jesus is back in the church.” This weekend, Catholics honor that sacrament with the Feast of Corpus Christi (also known as the Feast of the Body and Blood of Christ) — making today a fitting day for the announcement, Nalty said.

“You can see her piety,” Nalty said, referring afterward to the woman’s remark. “Jesus is back in the tabernacle.”

Next Friday, the day the Mass will return, is also a holy day, the Solemnity of the Most Sacred Heart of Jesus.

“It just shows the gift we have in Archbishop Aymond,” said Father Doug Brougher, who was stationed at the church from after Hurricane Katrina until its closure. “Thank you, thank you, thank you. Gratitude is the key to life.”

In an Uptown neighborhood where signs that read “Save St. Henry’s” still dot many yards, the decision will immediately begin rebuilding a community, said Alden Hagardorn, president of the Friends of St. Henry’s group that led the protest during its most bitter moments. Many St. Henry’s parishioners became what he called “Roaming Catholics,” visiting other Uptown Catholic churches. Now that St. Henry’s and St. Stephen are forming a new union of sorts, Hagardorn predicted that many people will return to both congregations, St. Henry’s during the week, and St. Stephen on Sundays. 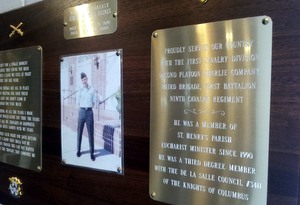 A plaque honoring Army Spec. Jeremy Heines was restored to the church foyer by his mother moments after the return of daily Mass to the church was announced. (Robert Morris, UptownMessenger.com)

“The most important part of this announcement is that St. Henry’s retains its identity as a church. I think this ensures our future as a place of worship,” Hagardorn said, describing the generations of families baptized, married and laid to rest in the parish’s 155-year history. “We didn’t want to wash away their memories.”

Weddings will also return to the church. They won’t be marketed immediately, as they are at some other parishes, to give anyone with a connection to St. Henry’s an opportunity to reserve a date there first. But for some smaller weddings, St. Henry’s will be preferable to the larger St. Stephen, Nalty said.

One lingering question is the future of the St. Henry’s rectory across the street. At one point, church officials had considered demolishing it for a parking lot, and converting the church itself into a hall to host a traveling exhibit about the life of Pope John Paul II. That exhibit is now slated for the seminary on South Carrollton Avenue, and the decision about the rectory is waiting in part on a study of Catholic school facilities, Nalty said. The rectory’s need for renovations have prevented the current tenant, the Ecole Bilingue private school, from fully using it, and the future of the nearby building that is home to the El Yo Yo Head Start Center is also being considered.

“It’s like a chessboard, who goes where,” Nalty said.

In the meantime, parishioners are faced with the more immediate task of preparing for the 23rd Annual Reunion Celebration, set for July 14 in the church parking lot. With the return of mass to the church, they expect a record crowd, and are already planning ways to “spruce up” the church.

“These prayers have gone a long way toward getting this church back,” Hagardorn said, closing the meeting at the church with a traditional benediction: “Go out and spread the good news.”