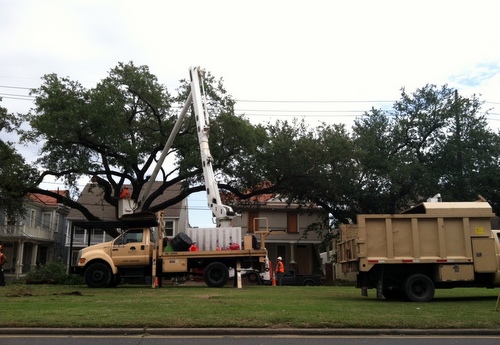 Workers "clear the air" on Napoleon Avenue. (photo by Jean-Paul Villere for UptownMessenger.com)

A neighbor returned from a road trip last week, and their first text to me upon being back in New Orleans said, “What’s with the hack job on the oak trees on Napoleon between Freret and St Charles???”  Indeed.

Her text was at once spot on but funny too as it didn’t mention the ginormous yellow crane towering over all, also on Napoleon and also between Freret and St Charles.  My response began “It’s all apart of the drain line prep being done.”  And what an amount of prep it has become.  So, yes, if you’ve been away for a week or three and you traverse Napoleon with any frequency, you’re likely to note a few changes, starting with the ample air space and clearance being cut along the avenue.  If you’re a visual person, your first clue — beyond the ridiculously (some might say comically and again) ginormous yellow crane — translates to more sunlight.  A la Lakeview after 2005.  There’s a lot less foliage over that way than there used to be.  Except Napoleon’s haircut seems more orchestrated and purposeful.  At least this remains my hope.

But make no mistake, the tree cutting smacks of a hack job.  These tree trimmers do not appear to have graduated from the Mr. Myagi School of Bon Sai Pruning.  Their skills are straight out of the book of triage.  Get it?  Triage?  Tree-age.  Oh well, I tried.  Bad puns aside, seems their limb removal sensibility stems from only that: what makes sense to remove.  So they’re lopping off here and broad cutting there.

Now, when you peer south down Napoleon, the avenue takes on the guise of a makeshift landing strip.  No more lush canopy.  Just stubby, nubby branches failing their reach, some wrapped in yellow caution tape.  The Red Hot Chili Peppers’ Anthony Keidis once sang “With all these dying trees I scream,” and while I understand these trees do not appear to be dying right in front of us, I can hear their screams.  You can too, if you listen.  But, the job is far from complete, and a dead oak or six might just make the body count of this little drain project.  I understand flood waters and amazing winds have whipped these trees in recent years, but nature never took a blade to their appendages.

All in all, I get it though.  I do.  Safety first.  This project requires clear air space.  And the narrow confines of the Napoleon median paired with the ginormous yellow crane leave little room for error.  I watched the other day by Samuel Square as they were setting up, and the crane’s cable had gotten knocked so it began to waver and shake.  And this cable, like the crane, is no small effort.  It is a lot of weight with a lot of force and it’s all noodling around without much control.  My nerves tensed just so, and I saw our long time fruit vendor mere feet from there with his daily offerings, and I’m like “Shouldn’t Mr. Joe be wearing a hard hat as he’s bagging up his customer’s orders!?”  Ack!

My nerves will likely go into hyperdrive once the project gets into its next phase which presumably involves giant legs of drain pipe spinning in the air to be placed inside the median.  Severed tree limbs are one thing, but public safety is another.  And I’m wondering if, while these events unfold, might Napoleon be shut down altogether.  Maybe? 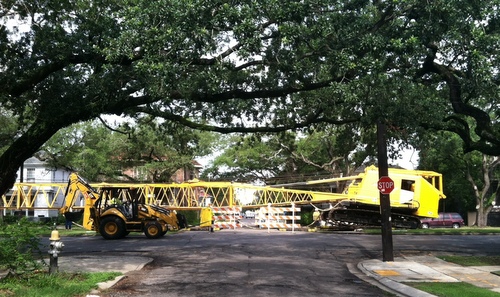 The giant yellow crane lays in wait. (photo by Jean-Paul Villere for UptownMessenger.com)