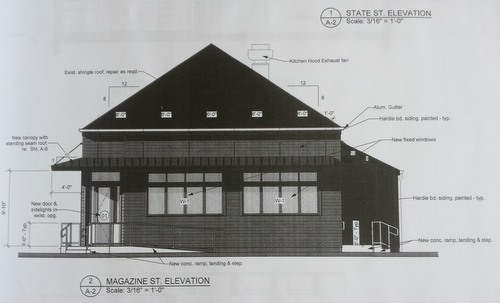 A sketch of the Reginelli’s renovation of the former WOW Wingery, which will remain the same size in the same footprint, but restore the exterior windows, awning and doors of a traditional New Orleans corner grocery.

Reginelli’s proposed move across Magazine Street breezed through its hearing before the City Planning Commission on Tuesday, drawing no opposition and winning unanimous approval from the commissioners.

Technically, the State Street pizzeria was asking permission to sell alcoholic beverages in the former WOW Wingery building it is renovating for a planned October relocation, but the city looks at the entirety of the project in evaluating the request. Owner Darryl Reginelli spoke briefly to the City Planning Commission with architect Gary Krasnow (click for video), explaining that he has no problems with the provisions the city staff recommends to prevent the new location from ever transitioning into a bar.

“I think it’s a win for the neighborhood. We’re going to completely redevelop the property and bring it back to an old, traditional corner storefront,” Reginelli said. “We’ve really revamped it, and we’re making a nice property here.”

The bar and the video poker machines are being removed, Reginelli noted. Krasnow added that the parking lot will be completely reconfigured to enlarge the parking spaces and point them all in the same direction.

No one else spoke about the project, and when the commissioners voted on it, they all voted in favor it without any discussion.

With the planning commission’s favorable recommendation, the project must now go before the City Council for final approval.