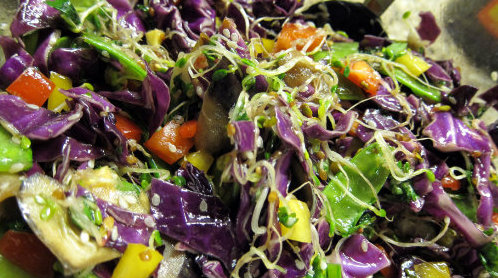 Don’t get me wrong, I can tear into a fried shrimp po-boy with the best of them, but eating like that everyday is the equivalent of putting your name on a high cholesterol waiting list. As much as I adore Southern cooking, I attempt to eat healthy at home — that way all bets are off when dining out.

When I lived in Arizona, there was some spillover from California’s healthy cooking scene, which I appreciated. In New Orleans, vegetarian restaurants seem to go over about as well as a fart in church, but out west meatless fare was downright abundant compared to Crescent City standards. Some restaurant’s menus even touted raw food choices, which is practically unheard of here.

Eating raw food is more than just throwing together a snooze fest of a salad. It’s a healthy-living movement that promotes eating live food. In a nutshell (see what I did there), uncooked food is the easiest for your body to digest and retains nutrients that would otherwise be lost from heat. Don’t get me wrong; giving up cooked food is about as easy as sticking to the latest fad diet, but during the summer when cranking up my stove turns my kitchen into an inferno, swapping a saute pan for my food dehydrator makes sense. I’ve used Alissa Cohen’s “Living On Live Food” for a few years now for heat-free meals with mixed results. While “uncooking” sounds like it is easy, if you are following recipes it is a little bit trickier than you’d expect. I’ve shared my tips, learned the hard way, below. 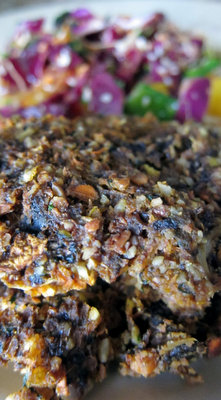 By-the-book cooking | I know this is hard for a lot of cooks who like to eyeball, and I certainly don’t follow recipes 100%. However in this case I don’t make substitutions, especially if you are using the food dehydrator. Trust me, just follow the instructions.

Experiment | Not everything in the cookbook is as delicious as the author thinks it is. No matter what she says, jicama is never going to taste like fast food fries regardless of what you marinate it in. I made an insanely delicious carrot pecan mushroom burger, but a faux chicken tender recipe turned out to be about as appealing as cardboard sprinkled with spices.

Get ready to spend | The better your ingredients, the better it is going to taste. Stay fresh and local when possible for the tastiest results. Also realize in order to make these meals taste good, a lot of recipes call for a lot of ingredients. There was one that called for (I kid you not) 20 ingredients: thanks, but I’ll pass. I typically look for recipes that call for the same products so i don’t waste anything and save some money in the process.

Love it and leave it | The best thing about raw cooking is you can pop it in the dehydrator and forget about it for 8-12 hours. The downside? Get ready for some intense prep work — there are usually a lot of herbs involved. My knife skills are as developed as a kindergartner with safety scissors, so make sure you allot a good amount of time if you are anything like me.

Back to basics | When all else fails, banana chips are your friends. I also dehydrate grapes into raisins, and herbs if they are on the verge of spoiling and I don’t want to throw them away.

One thought on “Christy Lorio: Turn off the heat with summer “uncooking””