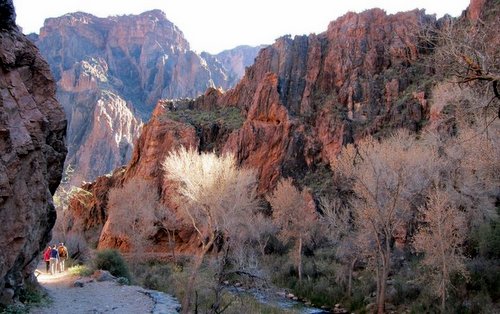 Three hikers in the Grand Canyon (photo by Christy Lorio).

When I was a kid, my family packed into the car National Lampoon-style every year for vacation. Dad would always drive with Mom playing co-pilot and navigator. We’d take a train up Pike’s Peak, drive over the Hoover Dam, cruise the Las Vegas strip, and peer down into the Grand Canyon. My Dad always wanted to go back to the Grand Canyon to hike to the bottom, but cancer took him away from us unexpectedly in his mid-40s and he never got the chance.

About nine years ago, I decided to make a longer trip out of it — I worked at Grand Canyon National Park for an entire summer. Working in a park isn’t for the faint of heart. It’s tight living quarters, hunkering down in a dorm-style room with my husband (then fiance).  It was also the first time he and I lived together. Talk about trial by fire. We both waited tables, which called for some early morning shifts. Not exactly my idea of a leisurely vacation, but work supplemented our fun which made sleepily toasting bagels worth it.

When Hurricane Katrina hit, we had to make a tough decision: Where do we live next? Neither of us planned on permanently leaving New Orleans before the storm. When my company offered to relocate me wherever I wanted we chose Phoenix, a 4 hour drive from the Grand Canyon. At that time, my brother, Chris, and his partner, Ruben, also decided to relocate to Arizona. Having worked on the South Rim for years (and long before our three month stint), Ruben was able to get jobs and housing, a luxury after the storm. And so began my trips up North, not only to visit my brother but to hike. 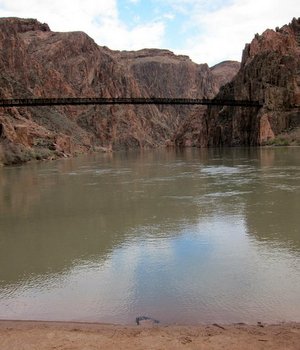 Eventually Chris and Ruben got jobs at Phantom Ranch, the only lodging at the bottom of the Canyon inside the park. In a place where most people book reservations up at a year in advance, I had the insider advantage. So about four times a year, I’d hike to the bottom, and I’d always go down there for Mardi Gras, with beads strapped to my backpack. I’ve never worked a day in my life on Fat Tuesday, and I’d be damned if I did when I lived in Arizona. So I’d hike, oftentimes by myself with snow drifts teetering above my waist. Most hiking guides discourage people to go solo, but I reveled in it. It gave me time to clear my head- and while I was enamored by my surroundings, my heart ached for New Orleans. But make no mistake, my “walks” were always enjoyable. I would be greeted by a cold Tecate, and my brother would cook up a meal worth hiking nine miles for.

Less than 1 percent of all visitors to the park actually make it to the bottom. I’d go even further and do some mildly brutal off-trail hiking with the Phantom Ranch crew. On a particularly “what in the $%#@ was I thinking” hike the path was so steep we’d have to scoot on our butts or risk falling. We also did a hell of a lot of rock climbing, which sometimes results in trying not to think about what would suck worse, landing on that prickly pear cactus or tumbling down the side of a cliff. But the reward was a glimpse of the Canyon that most people will never see.

Somehow I’d always pull together, sore muscles and all, and muster the energy to hike out, drive back to Phoenix, and work the next day. My sister has hiked to the bottom as well, although my brother has moved on and is back living in the South. My annual trips to the Grand Canyon are dwindling to every few years now, but that big hole in the ground has a firm grip on my spirit. Or maybe it’s just my Dad, pulling me back for one more go ‘round. 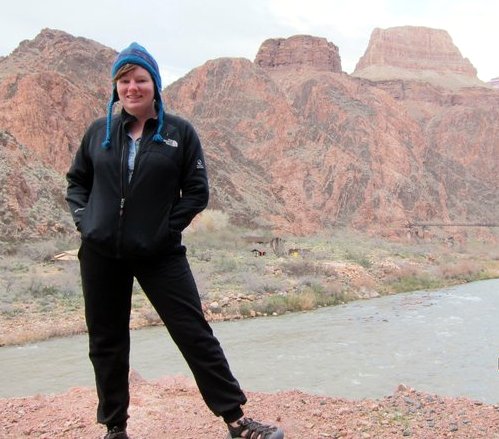 The author in the Grand Canyon (photo by Christy Lorio).