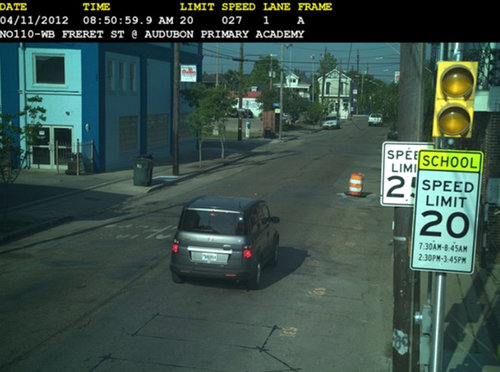 We keep on hearing it again and again, like a bad refrain: “If you don’t want a traffic camera ticket, don’t break the law.”

I’ve written so many columns criticizing the traffic camera program in New Orleans that I’ve frankly lost count. Every time I write one, somebody implies that the only people with anything to fear are those who speed or run red lights. Only scofflaws oppose the cameras, we’re told.

For those readers, I offer the above submission into evidence, a photograph taken by a traffic camera alleging a speeding violation on Freret Street near the former Audubon Primary Academy (which, incidentally, has been closed for some time). A reader contacted me and gave me the information regarding her citation because she didn’t immediately understand why she had been cited.

This isn’t supposed to happen. First of all, American Traffic Solutions (ATS), the Arizona company that manages the traffic camera program, is supposed to program the cameras properly. The city doesn’t check up on ATS. As far as the city is concerned, ATS is to be trusted implicitly and doesn’t have to submit evidence in administrative hearings like the rest of us chumps.

Of course, the city claims that an officer with the New Orleans Police Department reviews each citation before it goes out to ensure that the photographs show the violation alleged. This obviously isn’t happening.

In this case, an officer reviewing the citation should have immediately seen that the camera was ticketing for school zone violations outside of school zone hours. Thus, either the officer is such a poor observer that he has no business being a member of the force, or he rubber-stamped the citation (which, incidentally, is cheaper for the city).

There are even worse examples. Last week, Fox 8 reported a recent case in which a local resident, Caleb Fray, received a red light camera ticket claiming that he had run a red light in Mid-city in his Honda Accord. There was only one problem: the photograph and video accompanying the citation showed a Nissan XTerra SUV.

“I would think somebody’s looking through them, you know, before they send them out,” Frey told Fox 8. “I wonder if anybody does because you would notice that, you know, the registration shows a two-door car and the picture shows a four-door SUV.”

The answer is that the police don’t review these citations, not really. The entire program is built on simulating due process, not providing it. Due process is expensive and – I’ll say it again – the city’s goal is to maximize revenue, not protect the rights of citizens. It knows it can’t do both, and lip service is cheap.

This explains why the city has been fighting efforts in the state legislature to curtail traffic camera programs, instead proposing inadequate reforms of its own. Presently, the city fails to provide any oversight over ATS and refuses to provide any meaningful review in the Administrative Hearing Center, which handles challenges to camera tickets.

Hence, it comes as little surprise that rather than reforming the Administrative Hearing Center, a kangaroo court if there ever was one, the city instead proposes to provide a de novo review in Orleans Traffic Court.

In other words, the city wants to respond to the denial of due process in a city office by… doing absolutely nothing to reform that office. In fact, by providing a de novo review, one in which the case is looked at fresh rather than on a review of the record, the city is attempting to shield the Administrative Hearing Center from any review of its proceedings.

This is not kosher. As the Louisiana Supreme Court has noted, “the initial factfinding process [cannot] be deemed constitutionally acceptable simply because the government eventually offers a litigant an impartial de novo adjudication; he is entitled to a ‘neutral and detached judge in the first instance.’” Wilson v. City of New Orleans, 479 So.2d 891, 903 (La. 1985). In other words, the city can’t cure this on the back end.

Rodney Braxton, a lobbyist for the city in the state capitol, was recently quoted as saying “the process we have locally works.” Perhaps he’s right, but the question is not whether the process works, but for whom. Right now the city is grossly violating citizens’ right to due process. The process isn’t working for those who receive bogus tickets in the mail, or those who wait hours to challenge a ticket before a hearing officer who presumes guilt.

The only people who the process is working for are the good people at ATS and politicians who see camera tickets as a politically-safe source of revenue (unlike spending cuts or tax increases). It doesn’t work for us, and it never will.