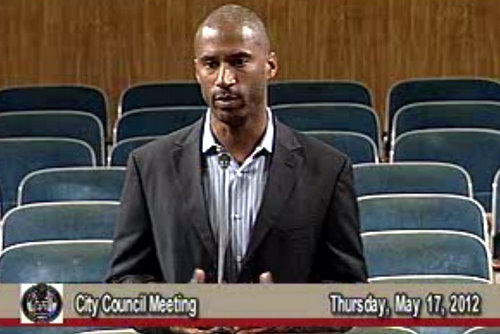 Councilmembers Cynthia Hedge-Morrell and Jon Johnson walked out of a council meeting two weeks ago after their bid failed to separate the two at-large seats into separately elected positions — rather than the unusual pick-two free-for-all system that has been used for years. But Hedge-Morrell and Johnson have not returned for any meetings since then — preventing the City Council from having enough members present to call any votes — and the members who voted against them then say they would now support the at-large voting change in order to get their missing colleagues back to work.

“While some of us wanted to have public hearings and more public input, that is not nearly important as supporting the desires of our council member colleagues and moving foraward as a cohesive body,” Head said Thursday during a public forum of sorts held in place of the regularly-scheduled council meeting.

If the real issue for Hedge-Morrell and Johnson is not the election change, but the pending nomination of Errol George to fill Head’s unexpired term in District B, they are thwarting the democratic process by simply going on strike to block him, several council members said. Kristin Gisleson Palmer said they should air whatever objections they have to George publicly, so he has a chance to respond.

“If it is the appointee, then the concerns should be addressed in the public forum,” Palmer said.

If the council does not make the appointment within 30 days of Head’s May 2 swearing-in as the at-large member of council, then the choice falls to Mayor Mitch Landrieu. But the council has not failed to make a choice, the councilwomen noted — two members are simply using a procedural issue to block its ratification.

Landrieu should not reward them by thwarting the council’s choice, several councilwomen said.

“We’re not always going to win and get our way, but picking up our toys and walking off is not the way to solve that problem,” said Councilwoman Susan Guidry. “I hope the mayor respects the choice of a majority of council.”

Councilwoman Jackie Clarkson suggested if Hedge-Morrell and Johnson continue to stall and prevent so much city business, the council is derelict in its duty to the city.

“I would absolutely not blame the people if they saw reason to recall,” Clarkson said.

Head said that District B is used to having a hands-on City Council member, and that her constituents are suffering from the extended vacancy in the position. She invited several speakers to vouch for the qualification and integrity of George — an urban planner who made his entry into politics through participation in the “I Quit” assessor reform effort — including “I Quit” ticket organizer Bill Aaron, Dana Henry, Irish Channel organizer Ed McGinnis and Henry Clay Avenue resident Andrew Ramsey.

George also spoke briefly to the council, saying he was disappointed by the lack of representation for the district but that he had no regrets about the process so far, and thanking Head profusely for his support. Clarkson predicted that even if his nomination fails, George has a bright political future in New Orleans.

“Some day, somehow, somewhere, you will be up here,” Clarkson said. “Because now you’ve enlisted an army to make sure that you do.”

To listen to the council members’ comments about the situation, see video clip below: