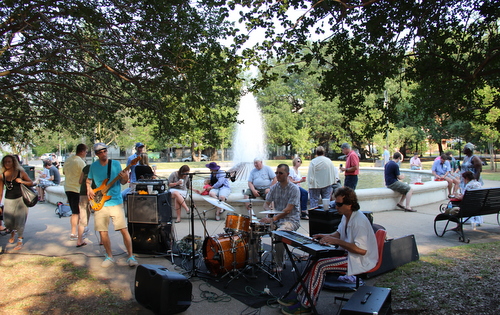 The Coliseum Square fountain flows in the background during a crawfish boil fundraiser for it this past Saturday. Coliseum Square is currently debating how to rein in the behavior of dogs at the park. (photo courtesy of Jim McAlister)

In hopes of reining in the worst-behaved dogs without making a prominent Uptown park hostile to responsible pet owners, the Coliseum Square Association plans to begin exploring new signs that will encourage better sharing of the space.

How to handle dogs in the park has been a bone of contention for the neighborhood for years. Many residents enjoy having a place to give their dog room to run, while many others are afraid to use the park because of the large dogs that sometimes roam loose there.

A month ago, Commander Bob Bardy of the NOPD Sixth District asked the association for direction on enforcement of leash laws in the park. In search of a middle ground, the association voted to send a weakly-worded statement simply recognizing Bardy’s duty to enforce the law, but that solution did not sit well with either side of the debate, so association president Robert Wolf brought the topic back up again at the May monthly meeting Monday night.

Most residents at the meeting were not opposed to some levels of dog play in the park, but simply wanted to stop those pet owners who let large dogs run wild, intimidating or threatening people and smaller dogs. The dilemma needs a solution that is more “neighborly” than turning it over to police, Wolf said, especially since the daily responsibilities of the NOPD Sixth District are so much more important than writing tickets in the park.

Several people noted that a contributing factor to the problem is the lack of any signs in the park stating that leash laws are in effect or that dogs are prohibited in the fountain, which contributes to maintenance problems. After a quick-paced but civil discussion, the association decided to create a committee to draft a sign that fits the historic nature of the park and lays out the rules regarding dogs and the park hours.

“We want to make it as inclusive as possible, but set some boundaries,” Wolf said.

Although the association does all the maintenance of the fountain, the city Department of Parks and Parkways will likely control the sign project, association members noted.

Crawfish | The park was the site of an extremely successful crawfish boil to raise money for grouting the fountain. About 200 people attended, consuming 500 pounds of crawfish and four and a half kegs of beer donated by the Eiffel Society, the Saint bar, the Avenue Pub and Bridge Lounge, reported Jim McAlister. A total of $4,750 was collected — including 16 new memberships and more expected to come — and after about $1,500 in expenses, the association expects to have raised almost exactly $3,000, exactly the amount needed for the grouting project.

Association leaders were surprised to see that attendance was overwhelmingly people who haven’t been involved in neighborhood projects before.

“We saw a lot of new faces,” McAlister said. “This was all new people.”

Magazine Street | A group of University of New Orleans urban planning graduate students led by Dr. John Renne presented results of a study they conducted on a proposal to allow two-way traffic on Magazine Street from Calliope to St. Andrew. Based largely on findings in other cities that converting one-way streets to two-ways increases economic prosperity without causing more crashes, they recommended making the conversion. In doing so, however, they noted that Magazine Street would become more difficult for bicyclists, and recommended that one lane of Camp Street be dedicated to bikes.

City Council | Dana Kaplan, an Irish Channel resident and director of the Juvenile Justice Project of Louisiana in Central City, introduced herself as a candidate for the District B seat on the City Council recently vacated by Stacy Head’s election to the at-large seat. Kaplan only spoke for a moment, saying that she was visiting Coliseum Square in an effort to get to know the residents and neighborhood issues around District B.

[Update, 9:29 a.m. Tuesday: Kaplan says she was just there to learn about the issues as a possible candidate. “I’m looking into the seat, not definitely running,” she writes.]

To read our live coverage of Monday’s meeting, see the box below: