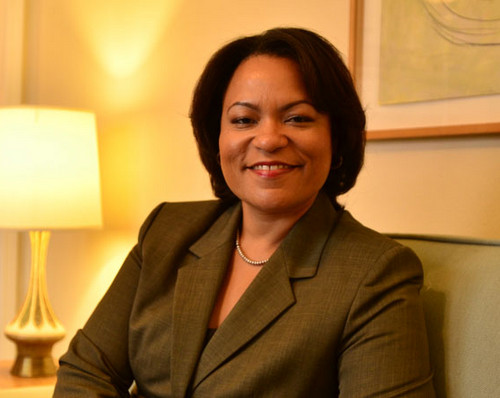 LaToya Cantrell (courtesy of the candidate)

Citing her experience with crime, quality of life and development issues as leader of a neighborhood that has been emblematic of the city’s recovery, the president of the Broadmoor Improvement Association announced her candidacy this week for the District B seat on the City Council.

“Based on the great training ground of Broadmoor in terms of working with a diverse community on every level, I would like to expand my scope of leadership to the next level, which is district wide,” said LaToya Cantrell in a telephone interview Thursday afternoon.

Broadmoor was at the center of the only infamous “green dot” placed Uptown after the flooding that followed Hurricane Katrina, designating the area for a return to green space instead of rebuilding. Cantrell, who had already been president of the Broadmoor Improvement Association for several years at that time, was instrumental in a recovery that has seen the rebuilding of not only homes but a prominent local school, library and soon a community health clinic.

“Some people had the feeling they were not wanted back in the city — poor people,” Cantrell said. “That green dot — it was not even just poor people. Our community wasn’t wanted back.”

Key to the rebuilding effort, she said, was ensuring that the same problems that troubled Broadmoor before the destruction of the storm were addressed in the plan for the neighborhood that returned.

“What we did make sure the social ills that plagued us were not forgotten,” Cantrell said.

Moving forward, Cantrell said she believes public safety is the top priority for all New Orleanians. She supports the initiatives promoted by the Landrieu administration so far, but she said she plans to encourage more community policing. The NOPD should continue building trust in the community that it is safe to report crime, and that their reports will be taken seriously.

“Sometimes you get someone out who is very responsive, and sometimes you don’t,” Cantrell said. “It needs to be consistent in getting the responses we’re looking for.”

Although it is not technically in District B, the proposal by Tulane University to build a football stadium on its Uptown campus is sure to remain a political issue, as meetings about the project are held throughout the summer. Cantrell said she has not studied the issue closely, but supports the council’s effort to give neighbors of the project a voice.

“I think process is important,” Cantrell said. “The residents need to be a part of the process — not to kill it, but create a better process for neighborhood engagement.”

Cantrell also promised a continued focus getting a city response on quality-of-life issues — cars illegally parked, improper property uses and so forth — that she already deals with on a regular basis as the president of a thriving neighborhood association.

“I do that now. They call me first, before we engage with government,” Cantrell said. “I don’t look at these issues as being minor. You come into contact with it daily, and it’s a problem. People are frustrated.”

Those issues also figured prominently in meetings former District B Councilwoman Stacy Head would have with neighborhood groups, and Cantrell praised Head’s work in the district, and in supporting Broadmoor.

“I looked at my City Councilperson as being a partner,” Cantrell said. “You have to form those relationships, and that’s something we were able to do well.”

Cantrell said she will also continue to support education and social services she championed in Broadmoor as an neighborhood advocate, but with the added strength that comes from a seat on the City Council.

“If I can do what I’ve done from outside, what might I able to do from inside to further help folks and expand opportunities for people?” she said.

Cantrell is the first candidate to make an official announcement about the race, although juvenile justice advocate Dana Kaplan has been visiting neighborhood groups as she explores a run.