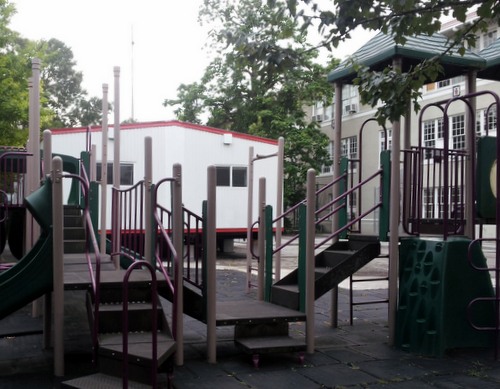 A trailer has been set up on the grounds of Audubon Charter School's Broadway campus in anticipation of construction beginning on the expansion project there. (Robert Morris, UptownMessenger.com)

Neighbors of the school belonging to the Upper Audubon Association filed suit in Civil District Court in December, appealing a decision the previous month by the city Board of Zoning Adjustments to allow the school expansion to move forward. City code prohibits any action from being sanctioned while an appeal is pending, which could prevent the school renovation from receiving its construction permits and ultimately jeopardize the expected December 2013 return to the campus, said officials at a neighborhood meeting about the school project Thursday evening.

Concern about the potential for delay was raised in December after the lawsuit was filed, but school officials said at the time they hoped the issues could be resolved during preparatory stages of the project. Attorneys for the neighborhood and the city have a meeting scheduled for Tuesday, and the issue is scheduled for court June 22.

Because the city entities are the only defendants named in the lawsuit, Orleans Parish School Board interim superintendent Stan Smith said the school only recently received word about the issue, and that he holds out hope it can be resolved without delaying renovations.

One of the chief complaints of the neighbors is that Audubon parents create congestion issues and park illegally — often blocking either the road or their driveways — during school opening and dismissal times, and that school officials have not been aggressive enough in reining that behavior in. John Lafargue, president of the Upper Audubon Association, said resolving the traffic problems would go far in addressing the issues in the lawsuit.

Part of Thursday’s presentation included a recent traffic study, which counted the amount of traffic at peak times around the vacant campus, then used computer models to estimate how many cars a 450-student elementary school would add. The study showed that traffic around the site is currently flowing easily with little to no delay, and that the return of students would have minimal impact.

Those findings, Lafargue said, do little to address the conditions that trouble the neighbors, and that their complaints should become the basis for a formal traffic plan around the school.

“They’ve done nothing to solve the traffic problem,” Lafargue said. “They commissioned a study, and that’s it.”

Supporters of the school expansion and those concerned about its effects both voiced their opinions at Thursday’s meeting. To read our live coverage, see the box below.