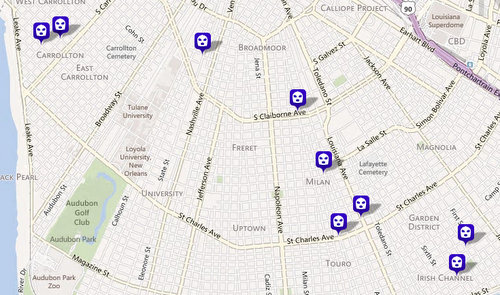 Robberies reported in the Uptown area since last Thursday. (map via NOPD.com)

A robbery victim in the Irish Channel this week was forced to remove his shoes and shorts at gunpoint, and another victim in the Milan neighborhood was fired upon and pistol-whipped by his assailant, a teenage girl, police said.

The spike in Uptown robberies over the last week can be traced to several seemingly unrelated suspects, police say, including one man looking for easy targets around the Oak Street corridor and a determined carjacker in the Fontainebleau area.

But after a number of recent arrests on gun charges, police are hoping that the pattern of robberies will subside almost as quickly as it started.

Amelia Street | Two of the last week’s robberies took place within minutes of each other on Amelia Street, though under very different circumstances.

Around 9 p.m. last Thursday, a group of men working on a home in the 2300 block of Amelia Street saw a teenage girl they recognized from the neighborhood walk by, said Sgt. Sabrina Richardson of the Sixth Distict persons-crimes division. She waved to them as she passed, but when she reached the nearby corner, she suddenly turned around with a gun in her hand and said, “Give me what you got,” Richardson said.

The men began to run and two managed to hide, but the girl chased a third man, firing twice as she ran, Richardson said. When she caught up to him, she began screaming and struck him several times with the butt of her gun before running off, Richardson said.

The victims told police they had actually seen the same girl be stopped and questioned by police on the street recently, and when detectives relayed their description of a tall, thin teenage girl to patrol officers, one officer recognized her and soon afterward found her on the street, Richardson said. They held her on a charge of possession of tobacco by a minor while they attempted to locate the victims to identify her, but could not find them immediately, and the girl was released, Richardson said. Detectives want to re-establish contact with the victims, but before they can do that, they are waiting on the State Police to generate a photo lineup with the girl’s image — because the local machine that does that for juvenile suspects is broken, Richardson says.

The second Amelia Street case took place about 15 minutes after the first. A woman leaving a nearby restaurant was getting into her car in the 1600 block of Amelia when a man approached her from behind and placed an object against the back of her head, demanding her purse and phone, Richardson said. She gave up her belongings and the man left, but she did not see him well enough to get a description, Richardson said. Detectives are now looking for video in the area that might show a suspect.

Irish Channel | The two robberies in the Irish Channel both took place in the early hours Tuesday and Wednesday, but it’s unclear whether they were committed by the same people, police said.

In the first case, a man walking home from a bar around 12:20 a.m. Tuesday heard someone behind him say, “Hey!” He turned around, and man with a semiautomatic handgun said, “Give me everything,” Richardson said. He dropped his keys, wallet and phone, but the gunman then told him to take off his shorts, shoes and socks and leave, Richardson said. The man did so, but when he reached the end of the block looked behind him to see the gunman conferring with another man who appeared to be serving as a lookout before both left, Richardson said.

The man’s clothing was not taken by the robbers, Richardson said. The victim noted that the gunman was missing a number of teeth, and many of those he did have were gold, but the second man was too far away for him to see clearly, Richardson said.

The following night, a bartender from a French Quarter restaurant had taken the streetcar home around 12:45 a.m. and was walking home, but when she reached Washington and Chippewa, a silver SUV rolled up and parked in front of her, Richardson said. The passenger showed a black handgun and said, “Give me everything,” taking the bag off her shoulder and snatching her cell phone from her hand. He then repeated that he wanted everything, gesturing toward her pockets, and she gave him her cigarettes and lighter. He gestured again, so she turned her pockets out, at which point the driver insisted to the gunman that they had to go, Richardson said.

Both men’s faces were covered by bandanas, so the victim said she could not provide enough information to create a composite sketch of them, Richardson said.

It’s unclear whether the two cases were committed by the same people, Richardson said. The only detail that might suggest so is that the suspects in both cases used the same wording, “Give me everything,” when speaking to their victims, she noted.

Two arrests | On Wednesday afternoon, NOPD Sixth District Commander Bob Bardy instructed his task force officers to focus their efforts on the areas where the robberies had taken place. Wednesday night, two more robberies were reported, and police made arrests in both of them.

In the first case, a woman near St. Mary and Sophie Wright Place had her purse grabbed from her by a man on a bicycle around 8:30 p.m. The woman struggled with the man, and he ended up leaving his bicycle and hat as he ran off, according to a report by task force Sgt. Eric Gillard.

As officers in the area began looking for the suspect, several people in the area told them they’d seen a man of his description walking nearby. Gillard found him near Religious and Felicity, but the suspect began to hurry away, tossing a chrome .32-caliber handgun to the ground as he tried to escape, Gillard reported. When police caught him, he was in possession of both the victim’s cell phone and a key to the lock on the discarded bike, and then told officers where he’d discarded the woman’s purse, Gillard reported.

“The officers were able to affect this arrest with the dedication and determination of the not only the Sixth District officers, but law abiding citizens in the area observing the officers were looking for a subject,” Gillard writes in his report. “The citizens directed the officers in the direction of Holding as he was attempting to avoid the officers as they converged on the area.”

Bardy said that in Holding’s case could have turned out far worse, and cautioned victims of crime against struggling with their attackers.

“When the guy grabbed the lady’s purse, she fought him, and he kept telling her, ‘Lady let me go, or I’m going to kill you,'” Bardy noted. “Well, he actually did really have a gun on him.”

The second robbery Wednesday night took place around 9 p.m. in the 3400 block of Carondelet. Officers were close by the area, and one of the suspects was seen discarding a gun as he headed into the 1800 block of Foucher Street. Police closed the block and brought out a tracking dog, and 31-year-old Edward Mitchell quickly gave himself up, Bardy said.

The victim in that case said he was unsure whether Mitchell was one of his attackers, so Mitchell was not charged with robbery, only possession of a gun by a convicted felon and resisting officers. Detectives are now exploring his possible involvement in the other recent robberies in the area, Bardy said.

Oak Street | Another small cluster of robberies in the opposite end of Uptown has been around Oak Street, with two muggings on either side. The first case was reported Saturday, and the second was on Monday, when two people unloading books from their vehicle in the 8300 block of Zimpel Street were robbed by a man with a gun who struck them as “nervous and unsteady,” police said.

The suspect in both of those cases is a black man in his mid-20s, about 5-foot-8 and weighing about 140 or 150 pounds, wearing a dark gray hooded sweatshirt with a black printed design and jeans. In both cases, he appeared to have been hiding in a dark area of the street, said Sgt. Chris Billiot of the NOPD Second District persons-crimes division.

“He’s lurking around,” Billiot said. “He’s staying in there waiting.”

Fontainebleau | A woman was robbed of her tan 2004 Jeep Liberty around 7 p.m. on State Street Drive in a case that bears a strong similarity to two previous incidents in the Fontainebleau area, investigators said. In each case, the gunman has appeared to be waiting for people as they park their cars, then demanded their keys at gunpoint, Billiot said.

In the first case, the car apparently ran out of gas and was quickly recovered. In the second, the gunman was scared off by the victim’s screams without taking her vehicle. In Tuesday’s case, however, he was successful in taking the victim’s Jeep — which raises the question of whether his spree may now come to an end, if his goal was simply to obtain a vehicle for some reason, Billiot noted.

Anyone with information about any of these robberies should call CrimeStoppers at 822-1111.

11 thoughts on “One robbery victim forced to remove shorts at gunpoint in Irish Channel; another pistol-whipped in Milan”