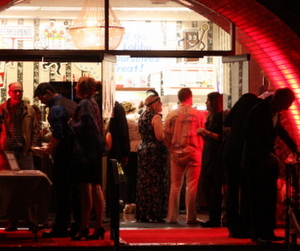 Crowds gather in the entrance of the Prytania Theatre for the New Orleans Film Society's annual Oscar-watching party in February. (UptownMessenger.com file photo by Robert Morris)

filmOrama, the annual showcase of new independent and foreign film, returns to the Prytania Theatre on April 20th for a week-long residence marking its third edition. “filmOrama has grown exponentially in the last three years. We have more films than ever and directors in attendance,” says New Orleans Film Society Executive Director Jolene Pinder. “Our goal is to screen movies that might not make it into other venues in the city.”

This year’s line-up mixes documentary and narrative films by internationally-known veterans like Abel Ferrara and Terence Davies with debuts by new filmmakers.

Highlights of the 2012 program include:

–Marley, a documentary about the crossover reggae superstar by Kevin MacDonald (The Last King of Scotland) that debuted at South By Southwest in March.

-An opening-day program of six films, including Terence Davies’ new drama The Deep Blue Sea and The Conquest, which re-enacts the rise to power of French president Nicolas Sarkozy.

-The New Orleans premiere of The Kid with a Bike, the new feature by Belgian auteurs Jean-Pierre and Luc Dardenne.

Several films will be screened with filmmakers in attendance:

-Brothers and Co-Directors Brandon and Jason Trost will present their film The FP, a futuristic comedy about a turf war between rival gangs of video gamers.

Tickets available at the Prytania Theatre box office or on its website: http://www.theprytania.com