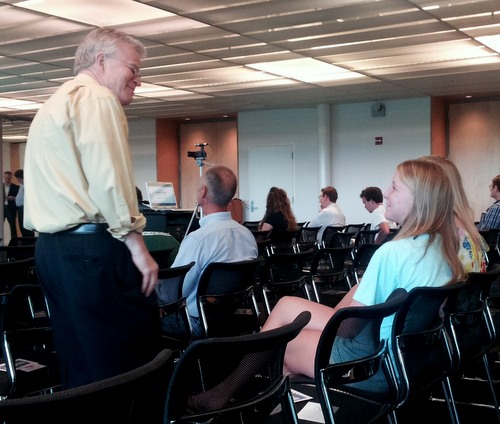 Former Gov. Buddy Roemer, who is seeking a third-party candidacy for President, laughs with students before a speech at Tulane University on Wednesday afternoon. (Robert Morris, UptownMessenger.com)

Go to college, get a job, and if you work hard enough, change the world for the better? Fat chance, former Gov. Buddy Roemer told an audience at Tulane University in a Wednesday afternoon stop on his third-party Presidential campaign.

“You think you run this country? They laugh at you,” Roemer said of Democrats and Republicans in Washington alike who are only motivated by campaign contributions. “You’re young. You’re stupid. You don’t give any money. You’re not important.”

Roemer, a four-term Congressman from Louisiana elected to a single term as governor in 1987, has built a Presidential campaign based on his opposition to the influence of money in politics. After the Republican Party largely shunned him during their primary process, Roemer declared his intention to run as an independent, seeking the nomination of the third-party Americans Elect organization that sponsored his visit to Tulane. Now, he boasts of small-dollar contributions from 130,000 individuals, and said he hopes to garner enough attention in the polls to qualify him for the fall’s televised debates.

In his address, Roemer denounced both parties as “married at the billfold.” While his criticisms focused on President Obama, he often couched them by mentioning that they were not personal, but that Obama is simply a product of the corrupt political system. For example, Roemer complained that the president’s signature legislative accomplishment, health care reform, has so many concessions to the insurance, pharmaceutical and hospital industries that it will result in a more costly medical system overall.

“You think your vote counts?” Roemer said. “No, it doesn’t. The only time you count is when you’re old enough or rich enough or desperate enough to give a big check to a politician.”

Those same special interests dominate policy making at every level of government, Roemer said. After the passage of controversial banking reform legislation — which he said still allows “too big to fail” banks that were the basis of the banking crisis — Obama held a Wall Street fundraiser hosted by investment firm Goldman Sachs.

“I think America’s in trouble,” Roemer said. “I think we’ve allowed our government to be run by GE and Goldman Sachs.”

The 68-year-old Roemer has carried this anti-establishment sentiments to both the right-wing Tea Party and left-wing Occupy Wall Street movement, and been rewarded for his outside-the-mainstream doctrine with appearances on “The Daily Show” and “Morning Joe.”

The country still needs health care reform, banking reform, and control of its budget, but none of those can be accomplished until the influence of money is removed from its governing system. Roemer proposes a single bill with several features to accomplish this: halting all fundraising by lobbyists, requiring all contributions to be reported within 48 hours, ending the unlimited contributions that can be made by so-called “Super PACs,” and creating criminal penalties for violations.

Only then, Roemer said, can America begin removing handouts and tax breaks to major corporations.

“Why do we subsidize oil?” Roemer asked. “What is wrong with this country? We are broke, and we give money to Exxon?”

The audience of 80 or so people quizzed Roemer on a number of points for nearly an hour (he laughed off a question about marijuana legalization by saying he’s a “traditionalist,” expressed broad support for Gov. Bobby Jindal’s education reforms, and defended a basic pro-life position that allows for some exceptions), but a number of questions focused on Roemer’s foreign policy views.

Without delving into the specifics of any of the country’s current military engagements, Roemer said he would return to a standard of requiring Congressional action to wage war abandoned by recent presidents of both parties. Furthermore, he would rely heavily on economic sanctions, describing himself as a key player in the effort to get Nelson Mandela released from South African prison in the 1980s. According to Congressional records, Roemer was one of about 30 original bipartisan sponsors of the Comprehensive Anti-Apartheid Act of 1986, the first sanctions placed on South Africa, where Mandela had been imprisoned for years.

“I got him out,” Roemer said. “It took seven months, but I convinced President Reagan to let us pass a bill to shut off all trade with South Africa. It would bring the country to its knees, and seven to eight months later Nelson was set free. We didn’t fire a single shot.”

Roemer said Obama has tried a similar approach in Iran, but in general has been “slow” and “weak” in his foreign policy.

“You can’t wink and nod at the Soviets, at the Russians. You can’t say, ‘Well, see you after the election.’ That’s bullshit,” Roemer said. “You’re supposed to be a grownup, Mr. President. You ought to tell the so-called ‘freely elected leader of Russia,’ and I put that in quotes, the head of their Gestapo for years, you ought to tell him, ‘No side deals. No winks and nods. Join the nation of free men and women, and you’ll be treated as a full partner.'”

With Iran, Roemer would call for a total boycott of all products made with Iranian oil until they give up all nuclear weapon ambitions. America should instead use natural gas and closer ties with Canada and Mexico for its energy needs, Roemer said.

Likewise, gasoline prices have skyrocketed in the last four years, and blame for that should fall not to Obama personally, but to the political system he serves, Roemer said.

“There’s some things he does not control. But he’s still a slave to it,” Roemer said. “He’s still stuck to Saudi Arabian policy. I’m not going to send the Marines on oil duty, and I’ll be damned if I will let this country be run by Saudi Arabia.”

To read our live coverage of Roemer’s address, click in the box below.