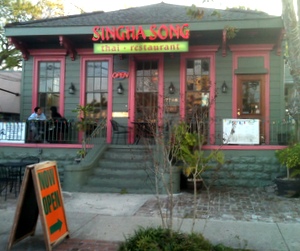 Alcohol sales could return to a Maple Street building that currently houses a new Thai restaurant, despite neighbors’ concerns that its history as a college bar could repeat.

The Singha Song restaurant in the 7700 block of Maple won approval Tuesday from the City Planning Commission to serve alcohol, after agreeing to restrict drink sales to food orders and to continue its current closing times of 9 p.m. on weekdays and 10 p.m. on weekends.

“It’s not a sports bar or a bar, it’s a sit-down restaurant,” said Jill Gautreaux, attorney for the restaurant. “They’ve been open for about six months now, and their clientele is mostly families. They’re not really attracting too many college students.”

About a half dozen members of Maple Area Residents Inc., however, urged the Planning Commission to recall the building’s history as a “white-linen” restaurant about 10 years ago that gradually morphed into a college bar known as Uptown Cajun.

“This became a wild college bar, as if we didn’t already have enough, and we hope you’re going to take action today to prevent that,” said nearby resident Keith Hardie. “The alcoholic beverage issue in the neighborhood is a problem. We don’t really want any more alcoholic beverage outlets. We feel like there are enough.”

“Maple Street … is basically turning into a mall,” said resident David Keiffer. “Groups of students move down Maple Street from one end at Broadway to Madigan’s at Carrollton and over to Oak Street.”

The Planning Commission focused on the residents’ specific concerns about the location, rather than the more general issue on Maple Street. After detailing operating conditions intended to prevent another return to a college bar, commissioners voted 7-0 in favor of the alcohol sales there, a recommendation that will be forwarded to the City Council for final approval.

The restaurant’s attorney assured the commission that the conditions would be followed this time.

“I understand there may be a history, but it’s simply not applicable,” Gautreaux said. “This is simply not going to be a college sports bar.”