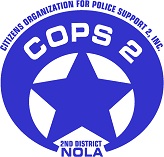 Reviving an old tradition, a group of citizens who support the efforts of the NOPD Second District publicly awarded a number of officers for their crime-fighting efforts this month.

COPS 2 (Citizens’ Organization for Police Support 2) traditionally raises money through private donations and the annual Magazine Street Blues Festival to fill in the gaps between the Second District’s needs and the city budget. The organization has replaced furniture and computers in the district’s aging station house, and also provides meals for the officers during major deployments such as Mardi Gras.

In years past, COPS 2 would also name an officer of the month in the district, and present that individual with a cash award at the district’s monthly meeting with community members. The organization also has quarterly and annual Tommy Parker awards, named for one of the group’s founding members. Last week, that tradition was revived by Second District Commander Paul Noel — and the organization actually had several months’ worth of catching up to do during the gap in leadership in the Second District.

The awards were as follows:

Officer of the Month

The awards are supported by a grant from the Azby Fund, but most of the work done by COPS 2 is funded by its memberships, said Trish Clay, president of COPS 2. She urged the residents attending the community meeting to visit the COPS 2 website, http://cops2.org, and consider becoming a member.

“It’s a way to be a positive part of the community,” Clay said.