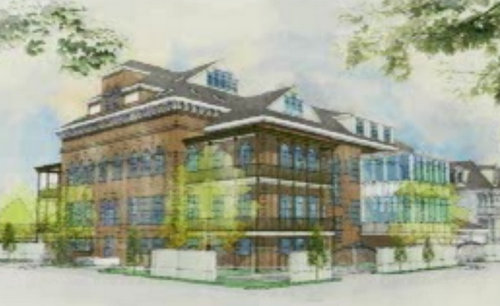 A rendering of the LaSalle school on Perrier Street, renovated into condo units with outside balconies. (image via nola.gov)

Exterior balconies and additional living space proposed as part of the redevelopment of the century-old LaSalle school into luxury condominiums have drawn the opposition of nearby neighbors, so city officials have ordered a historical review of the plans before any decision is made on the project.

The Perrier Street school, which has been vacant since the New Orleans Center for the Creative Arts moved out about a decade ago, was bought by developer (and school alumnus) Jim MacPhaille at auction last year. Soon afterward, he proposed converting the building into about a dozen spacious condos, an idea that drew general enthusiasm from the neighborhood.

The redevelopment will require city approval, and at the first step in the process, today’s meeting of the City Planning Commission, a contingent of about 15 neighbors showed up in opposition. They supported the conversion of the building into condominiums, they said, but they objected primarily to two specific features of the plans: the addition of outdoor balconies, and the enlargement of several wings of the building to create more space inside.

Justin Schmidt, attorney for the project, told the planning commission that the additions are intended to create more space for the target market, “those empty nesters who want to stay in area, stay close to park, stay close to Langenstein’s and stay close to all their friends” but no longer need a full-sized Uptown home. By reducing the size of the units, they will become more affordable to more transient residents, such as those who may want to live near the universities nearby, Schmidt said.

“The results that you get with the larger units is a more stable project, a project that’s going to attract buyers that are more appropriate for the neighborhood, that are going to respect the neighbors,” Schmidt said. 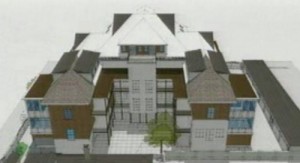 A rendering of the LaSalle school from above. (image via nola.gov)

Specifically, the additions expand on wings of the school that would be too narrow for full-sized units on their own, Schmidt said. The ironwork on the balconies, said architect Hank Smith, while not historically correct, would be of light materials to remain applicable to the project.

“We need the balconies for owners to have some kind of outside experience without having to go down to the yard,” Smith said. “It mostly embraces the building and doesn’t overpower it.”

The Upper Hurstville Neighborhood Association remained technically neutral on the project, but a smaller group of individual neighbors right around the property said they opposed the exterior additions to the building. By incorporating attic space and building on to the school, the project dramatically expands the amount of space inside.

“One look at the plans and we realized, this was not our understanding of the project,” said Clifford Favrot.

Speaking in sequence to fit multiple speakers and a lengthy presentation into the time allotted for opponents, the neighbors said the building should stay within its current shape, with no balconies or additions to the wings or roof. More off-street parking should be provided, in case the garage on the building’s first floor is taken up by storage of residents’ boats or third cars.

“We’re willing to compromise with multi-family, but don’t give us all the ills of multi family,” said James Huger. “If this plan is allowed, you’d be giving the neighborhood the worst of multi-family, with none of the benefits of saving the old building.”

During the presentation, commissioners Lou Volz and Lynes Sloss both asked detailed questions about the need for the balconies and the wing additions. When it came time to vote, Volz suggested instead sending the project to the staff of the city’s Historic District Landmarks Commission for review of the additions.

“I am not persuaded by the arguments made for the balconies,” Volz said. “I think they’re inappropriate.”

The other commissioners concurred, saying they share concerns about the scale of the building on the site. By a unanimous vote, the commission decided to defer a decision for two meetings (presumably until April 24) so the review can take place.

After the meeting, MacPhaille reiterated in a telephone interview that he has been working with the neighborhood association for a year, and already substantially reduced the number of units at the site substantially to accommodate the neighbors. In the meantime, he said, emergency repairs to the building are continuing, and he expects to find a solution soon.

“There’s always surprises in these things,” MacPhaille said. “It’s a process and we have to go through it. We’re going to work with the neighbors and try to come up something that’s a win-win for everyone.” 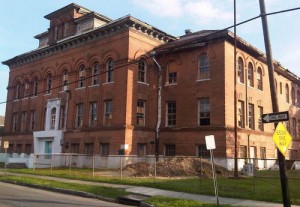 Windows are boarded up and doors are chained shut at the LaSalle school building on Perrier Street as emergency repairs continue. (Robert Morris, UptownMessenger.com) 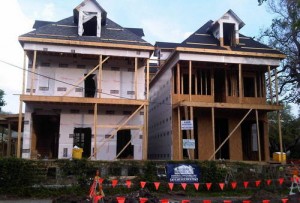 Developer Jim MacPhaille is also building two large single-family houses on the LaSalle school site. Murray Nelson, a neighbor directly across the street from the houses, said Tuesday that he fully supports MacPhaille's plans and is happy to see them moving forward. (Robert Morris, UptownMessenger.com)