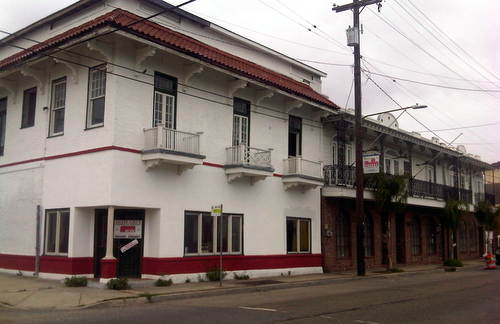 The corner of Freret and Cadiz, showing the row of large commercial buildings owned by the Barreca family. (Robert Morris, UptownMessenger.com)

A proposed redevelopment of the shuttered Freret Street landmark Frank’s Steakhouse hit an unexpected snag Monday when a city committee rejected its bid to tear down two houses in the rear for parking.

In a separate project, an attorney seeking to develop several blighted lots on Tchoupitoulas into a bank or possibly a restaurant ran into the same problem: the Neighborhood Conservation District Committee denied his request to demolish a home in the project’s footprint.

The project on Freret Street would bring one of the corridor’s last, largest properties back into commerce. Yung Ching Lau, owner of the Green Tea restaurant on Louisiana Avenue near Magazine Street, plans to redevelop the property into four restaurants on the ground floor, with upstairs space used for offices and apartments, he told the Neighborhood Conservation District Committee.

Lau would move his current restaurant into one of the spaces, he told the Neighbors United at a recent meeting, and he is still lining up tenants for the other three, said Neighbors United president Andrew Amacker. The building has some parking in the rear, but it is “horribly inefficient,” Amacker said, so Lau wants to demolish two shotgun houses on Cadiz Street to make room for more parking.

The neighborhood group voted to support Lau’s request, on the crucial condition that he take possession of the properties first. They have been owned for years by the Barreca family that formerly operated Frank’s Steakhouse, and getting them into a different owner’s hands would be a major first step, even if the redevelopment falls through for some reason. 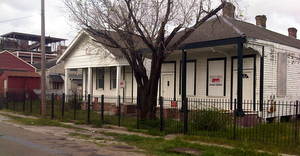 Two homes on Cadiz that would be demolished for parking behind the Frank's Steakhouse redevelopment. (Robert Morris, UptownMessenger.com)

With a representative of Neighbors United by his side, Lau made his request to demolish the two Cadiz Street houses before the Neighborhood Conservation District Committee in a Monday afternoon meeting (Click for video). With very little discussion, the committee voted 5-3 against demolishing the first Cadiz house on the agenda.

“You don’t need to tear these houses down to give you enough parking,” NCDC member Georgia Bryant said after the vote, describing her frustration with previous demolitions nearby for redevelopments that never happened. “It seems to me with a good architect, you can do what you want and leave these two houses.”

Lau said that the current configuration would give him only about 30 spaces. He is not required to have more, because the building would be divided into four restaurants that individually would not require parking, but the total effect of the redevelopment could have a much greater impact on parking, noted NCDC chair Ed Horan. Further, Richard Dimitry of Neighbors United pointed out that three restaurants are already operating across the street, for a total of seven after the steakhouse is redeveloped, and that two more buildings are under construction.

The committee members were unswayed, however, and proceeded to deny the demolition of the second Cadiz house by the same 5-3 vote. The decision can be appealed to the City Council, and while Lau declined to comment after the meeting, Dimitry said he hopes the developer will do so.

On Freret Street, news of the decision was met with surprise and frustration.

“Frankly, I’m disappointed,” said Amacker, the neighborhood association president. “We’re trying to get Freret Street redeveloped, and that’s the last major piece. Anyone who tries to purchase the Frank’s Steakhouse building will want to demolish those two buildings.”

Greg Ensslen, organizer of the Freret Market, said his own examination of the Frank’s building led to the same conclusion: Removing the two houses makes good business sense.

“There’s a creative solution out there,” Ensslen said. “Anybody who comes there, that’s going to be their request.”

Back to the drawing board

In a separate project, attorney Troy Keller sought permission to tear down two buildings, one on Tchoupitoulas and one on Austerlitz. Over several years, Keller has been purchasing property in the block (about midway between Napoleon and Louisiana), including both homes and vacant lots, for a total of at least seven contiguous parcels, according to city property records.

With enough parcels assembled, Keller said he recently began discussions with the Faubourg Marengo Neighborhood Association about what kind of development project would be acceptable to them. One strong idea that has emerged, he said, is for a bank. There are very few banks on Tchoupitoulas, and neighbors believe it would may not be much of a traffic burden, while increasing safety to some degree through lights and cameras.

“I’m truly trying to be a good neighbor,” Keller said in an interview afterward. “I’m trying to get their input.”

Keller’s first request, for the Austerlitz property, went fairly smoothly. He told the committee he has no firm plans for a project there, but wanted to get the demolition permits first so the development could move forward. While the discussions about the exact project move forward, he has received 41 emails from the neighbors in favor of his efforts, Keller told the committee.

“Overwhelmingly, they want this property developed,” Keller said. “It has been a blight and a sore spot for over 10, 12 years at this point.”

Demolition of the apartment building on Austerlitz passed by a vote of 7-1. The committee then took up the neighboring property on Tchoupitoulas, and NCDC member Lily McNee resumed her questions about the development plans. It is his first development, and while he doesn’t have financing, he is working with a banker on that side of the project as well, he told the committee. Likewise, he hasn’t met with any potential banks about locating there, though the neighbors would prefer that or perhaps a restaurant.

At that point, the NCDC voted 5-3 against allowing the demolition of the Tchoupitoulas property. Keller said after the meeting that he plans to go back to Faubourg Marengo, try to iron out a final idea that he can then take to a developer, and then return to the city with more concrete plans.

“My take was, I didn’t have a plan in place for them to give me the OK to tear down a property that in their mind was in good shape,” Keller said.

The buildings at Tchoupitoulas and Austerlitz owned by Troy Keller. He also owns the vacant lots behind the buildings. (image via Preservation Resource Center)

The NCDC took action on several other Uptown properties on Monday as well:

Photos of the properties on Monday’s agenda can be found on the Preservation Resource Center blog.